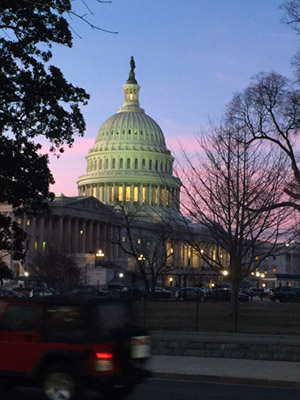 This afternoon—about 60 hours after the U.S. federal government shutdown last Friday night—a bipartisan group of Senators negotiated a deal that is expected to lay the path for resuming normal government operations.

Essentially, Senate Democrats lent their support for reopening the government in exchange for a commitment from Republicans to hold a vote on fixing the issues with the “Dreamers,” undocumented immigrants who came to the country as children and face deportation. It will also reauthorize the Children’s Health Insurance Program for six years.

Next, the House of Representatives is expected to approve the bill, which will go to the President for signature, making it possible for the government to reopen on Tuesday, January 23.

The bill will fund the government through Thursday, February 8.

The U.S. Senate adjourned Sunday night about 10:00 p.m. following a weekend spend unsuccessfully searching for a deal that would end the federal-government shutdown.

Senators are scheduled to vote on Monday at 12:00 p.m., on a bill that would fund the government through Thursday, February 8. Republicans have promised that if this bill passes, they will work with Democrats on a deal that would strengthen border security while also protecting undocumented immigrants from being deported beginning Monday, March 5. Known as “Dreamers,” they were brought to America as children and are in the country under the Obama Administration’s Deferred Action for Childhood Arrivals (DACA) program, which President Trump ended in September.

The full impact of the government shutdown will begin to be felt on Monday when hundreds of thousands of government workers will be ordered not to work, federal offices will close, and many of America’s services will be unavailable to its citizens.

The U.S. federal government is now shut down, after the Senate late last night failed to pass a Continuing Resolution (CR) that would keep funding the country’s operations through February 16. Legislators are expected to keep working over the weekend, with the House of Representatives reconvening at 9:00 a.m. and the Senate at 12 p.m. today—raising hopes that a compromise can be reached by Monday morning.

The federally funded Smithsonian Institution’s museums and zoo will remain open this weekend but close on Monday if no resolution is reached on the budget.

Federal agencies that work with science centers and museums will follow their existing plans for situations such as this, winding down operations and closing most offices, including at the (U.S.) National Science Foundation (NSF), National Aeronautics and Space Administration (NASA), National Oceanic and Atmospheric Administration (NOAA), and National Institutes of Health (NIH).

The current Continuing Resolution (CR) that funds the U.S. federal government expires tonight at midnight. Negotiations over another CR hit a roadblock earlier this week. The two main sticking points are the discretionary caps for defense and nondefense spending and a legislative fix to protect young undocumented immigrants, known as “Dreamers,” who are in the country under the Obama Administration’s Deferred Action for Childhood Arrivals (DACA) program.

With no bipartisan agreement in sight, on Thursday the House Republicans pushed forward with a CR that funds the federal government through Friday, February 16. In an effort to pick up some Democratic votes, the CR also includes a six-year reauthorization for the Children’s Health Insurance Program, which insures children from low income families. The House passed the bill yesterday evening on a nearly party-line vote of 230-197.

The House-passed CR is facing strong opposition from Senate Democrats because it does not raise the spending caps or include a fix to protect the Dreamers. There are also a handful of Senate Republicans who are objecting to the House CR. While the Senate agreed to consider the House-passed CR last night, there has been no progress made today on approving the bill or another, shorter-term CR.

If there is no agreement reached on a CR before midnight tonight, the federal government will be forced to shut down all non-essential activities, i.e., those activities that are funded through discretionary appropriations and are not deemed necessary to “provide for the national security” or to “protect life and property.”

Senators are continuing negotiations, but the possibility of a shutdown grows more likely by the hour. The House, which has already passed the CR, is scheduled to be in recess next week, but remain in session today in case a compromise can be reached.

Early hopes for the passage of a routine CR to keep the U.S. government funded have degraded quickly throughout this week.

Although the Republican-controlled House of Representatives passed a measure tonight that would extend current funding until February 16, the Senate now seems unlikely to approve anything with the required 60 votes.

Republicans hold 51 of that chamber’s 100 seats, but it doesn’t look as if they can get to 60. One Democrat, Joe Manchin (WV) has said he will vote for it, but three Republicans are saying they will not: Lindsey Graham (SC), who wants more military spending and an immigration deal; Rand Paul (KY), who is concerned about the federal debt; and Jeff Flake (AZ), who said he’s not inclined to vote for the bill.

If it does not pass, the government will “shut down,” with many offices closed and hundreds of thousands of federal employees furloughed, including at agencies with museum and STEM programs, such as NSF, NASA, NOAA, and NIH. Essential services would still be provided, including national security, the U.S. mail, medical emergency services, air traffic control, and other critical government functions. Processing for passports and visas could also be delayed.

National museums, parks, and monuments could close, which prompted public demonstrations during the last shutdown in 2013.

The U.S. federal government’s current fiscal year (FY2018) began on October 1, 2017. Congress was not able to complete the 12 appropriations bills that, taken together, make up the federal budget before the new fiscal year began. Instead, they have passed a number of Continuing Resolutions (CRs) to keep the government funded and operating at current levels while they try to reach an agreement on the FY2018 budget.

Without the overall spending levels being set, Congressional appropriators have been unable to finalize the appropriations bills.

A Deal on the Horizon?

Nearly four months into the new fiscal year, it appears that Congress is finally making progress toward a deal that would set new discretionary spending levels for the current fiscal year (October 1, 2017–September 30, 2018) and the next one (October 1, 2018–September 30, 2019). While those negotiations are ongoing, Republicans and Democrats expressed optimism last week that they would be able to work out a deal before the current CR expires this Friday, January 19. The deal would raise the caps for both defense and nondefense spending. Democrats are continuing to insist that the caps for defense and nondefense spending be raised by equal amounts, while Republicans want more spending for defense than nondefense programs. While this has yet to be settled, they appear confident that a deal is within reach.

Even if they do reach an agreement, Congressional appropriators will still need several more weeks to draft an omnibus spending bill that combines the 12 outstanding appropriations bills into one massive bill. Congress will need to pass another CR—probably until mid-February—to give themselves more time to finish the FY2018 budget.

While Congressional leaders think that they can reach a two-year deal to raise spending caps during this week, there are other issues that may trip up the negotiations. Democrats are insisting the deal include protections for young undocumented immigrants, known as “Dreamers”, who are in the United States under the Obama Administration’s Deferred Action for Childhood Arrivals (DACA) program. Republicans are insisting that any agreement on the Dreamers must include increased funding for a border wall between the United States and Mexico. There are also ongoing discussions about adding an extension of the Children’s Health Insurance Program, which insures about nine million children from low income families, and additional disaster assistance for Florida, Texas, Puerto Rico, California, and other states impacted by the recent hurricanes and wildfires.

These and other outstanding issues will need to be resolved and Congress will have to pass another CR before Friday, January 19, to avoid a government shutdown—something Congressional leaders, on both sides of the aisle, desperately want to avoid.