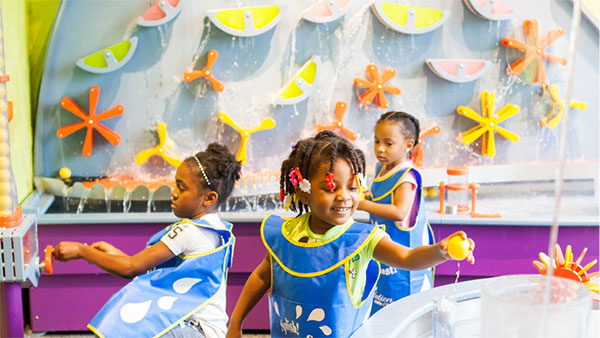 A glimpse of the return on federal investment in science centers and museums—and America’s future—in the Science at Play exhibition at the Kentucky Science Center in Louisville.

Please join ASTC in signing on to this letter and sending a massive, unified message to the U.S. House and Senate—from institutions of all types across the nation—urging support for federal programs that help science centers, museums, and other educational organizations better serve their communities.

CEOs/Executive Directors, click here to add your institution’s name to the letter below by Friday, July 21.

Write to ASTC if we can help answer any questions.

Please note: This letter is for intended for science center and museum organizations only, not individuals.
If you are interested in helping with advocacy efforts as a U.S. citizen, click here.

Federal funding helps museums care for treasured collections, preserve history, educate students, train classroom teachers, reach new audiences, and tailor programming to meet the particular needs of their communities. These programs do not drive deficits; the largest source of dedicated federal funding for museums—the Office of Museum Services at IMLS—costs less than 10 cents per American. As a result of this limited capacity and the great demand for their services, programs that support museums are extremely competitive and only the strongest proposals receive funding. For instance, NEH was only able to fund 16 percent of the applications it received in Fiscal Year 2016. These programs also attract private, local, and state funding to amplify US taxpayers’ investment, as evidenced by each NEA grant dollar leveraging an average of more than nine non-federal dollars.

America’s museums are economic engines in communities large and small —whether they are museums of art, history, science, military and maritime museums, children’s museums, aquariums, zoos, botanical gardens, arboretums, historic sites, presidential libraries, or science and technology centers. In addition to their own considerable economic impact, they attract tourism spending; cultural and heritage travelers stay longer and spend 60 percent more than other travelers. They are part of a robust arts and culture industry that annually generates $27 billion in local, state, and federal tax revenues, far more than it receives from government sources.

Museums are critical educational infrastructure, spending $2 billion annually on education. In addition to its considerable intrinsic benefits, research shows that museum education also produces a measurable impact on students. According to a recent study by researchers at the University of Arkansas, students who attended a half-day field trip to an art museum later demonstrated an increase in critical thinking skills, historical empathy and tolerance. For students from rural or high-poverty regions, the increase was even more significant.

While we acknowledge the many pressing priorities in the budget, the tremendous economic and educational contributions of museums make them eminently worthy of federal funding. As you make decisions about the Fiscal Year 2018 budget, we urge you to support agencies and programs that help museums make a difference in their communities.

American Institute for Conservation of Historic and Artistic Works

Association of Zoos and Aquariums