On Monday, September 26, ASTC honored the winners of the 2016 Roy L. Shafer Leading Edge Awards at ASTC 2016 in Tampa, Florida. The “Edgies” recognize exemplary accomplishments during the past three years. As Linda Conlon, ASTC’s board chair, remarked, “We don’t have a red carpet out there but these are very firmly the Oscars of the science center world.” 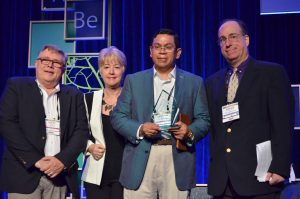 Over a five-year period, Museo Móvil Interactivo, recipient of the Edgie for Visitor Experience (small institution), will bring an interactive science experience to all 22 million residents of Mexico City, including those in isolated or disadvantaged communities. The free mobile museum presents three key messages: 1) Science is all around us, 2) Science is fascinating, and 3) Anyone can become a scientist. Guided by young scientists, visitors can explore the 800-square-foot (75-square-meter) trailer’s exhibits on the brain, geology, scientific vocations, and the science of 24 typical daily situations, each associated with a particular hour of the day. A mobile planetarium and portable tents with exhibits and workshops extend the experience outside the trailer.

As he accepted the award, Arturo Barba Navarrete, the museum’s general director, explained, “With our museum, we want to contribute to stimulating scientific vocations in children and young people. We want to show them that science and technology are great choices. We also want to show society that science allows people to make better decisions and can contribute to some of the most important problems of our city and our country.” 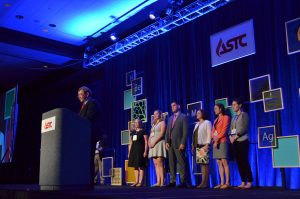 Museum of Science, Boston, received the Edgie for Visitor Experience (large institution) for its 13,000-square-foot (1,208-square-meter) traveling exhibition, The Science Behind Pixar, which engages visitors in the computer science, math, and science behind Pixar Animation Studio’s films. The exhibition is structured around the eight steps of Pixar’s technical production pipeline: Modeling, Rigging, Surfaces, Sets and Cameras, Animation, Simulation, Lighting, and Rendering. The museum partnered with Pixar to develop physical, computer-based, and multimedia exhibits, and Pixar produced videos for the exhibition showcasing how its employees have approached technical challenges. The museum involved potential visitors in the development process to ensure the exhibition engaged all audiences, especially visitors with disabilities, girls, and women.

In his acceptance speech, President and Director Ioannis (Yannis) N. Miaoulis explained that the Museum of Science wanted to educate a broad and diverse public about computational thinking, and Pixar films were “the perfect vehicle.” He remarked, “Visitors left The Science of Pixar with higher levels of interest in learning about and practicing STEM [science, technology, engineering, and math], particularly math and computer programming. The experiment worked—popular culture and STEM learning can indeed go hand in hand.” 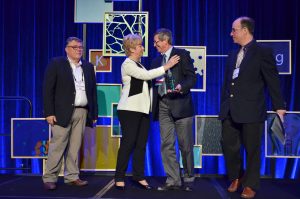 The Edgie for Leadership in the Field (executive leadership) went to David E. Chesebrough, president and CEO of COSI, Columbus, Ohio. Chesebrough, who will retire near the end of this year, used the occasion of COSI’s 50th anniversary in 2014 as an opportunity to build toward the future, launching an Investment Campaign that raised more than $10 million. The campaign resulted in the new Energy Explorers exhibition, a “slow food” theme in COSI’s little kidspace, the Teen Tech Studio digital learning lab, and the reopening of COSI’s planetarium. In addition, Chesebrough has worked to unveil the new COSI Center for School and Community Partnerships and spearhead many other initiatives that now have COSI respected as a community collaborator and learning resource.

Chesebrough reflected on how meaningful the award was to him, especially because Shafer was his personal friend and mentor, as well as a fellow leader of COSI. Chesebrough said although he is retiring from COSI, he is not retiring from the field, and will continue to support science centers’ capacity to innovative, differentiate, and become financially sustainable in order to contribute to their communities. He said, “I applaud the collegial fashion in which this field shares ideas openly and encourages each other. I’m sure COSI will continue to shine and contribute to our shared efforts.” 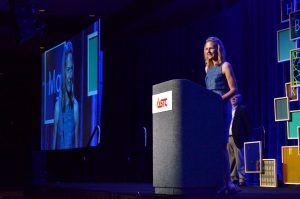 Kristin Leigh, deputy director and director of community engagement of Explora, Albuquerque, New Mexico, is the recipient of the Edgie for Leadership in the Field (nonexecutive leadership). The jury honored Leigh for her work in developing a “listen, welcome, co-create” approach to learning from and collaborating with highly diverse audiences, with the goal of improving the lives of Albuquerque’s children and families. Leigh has shared her work with the field and encouraged Explora staff to grow as leaders.

Leigh spoke from the stage about the need to bring people and resources together for positive change and to “turn outward” and combine expert knowledge with critical public knowledge for greater impact and relevance in the community. “Clearly as a field we’re increasingly aware that it’s time to turn outward, look outside our walls, and listen to traditionally unheard voices. This has been transformational for Explora.”