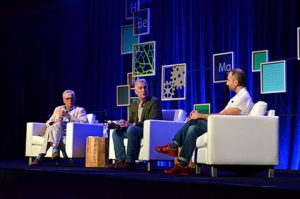 The Alan J. Friedman Science Center Dialogues are a memorial to the founding director of the New York Hall of Science, Queens, and are presented in the spirit of the commitment Alan had to the science center field and the issues and interests that were reflected in his own writings and presentations over the years.

In the second annual edition of the Alan J. Friedman Science Center Dialogues, three science communications researchers explored the academic research about how society views and talks about scientific and technological topics.

The conversation was moderated by John Durant, director of the MIT Museum, Cambridge, Massachusetts, and adjunct professor in MIT’s science, technology, and society program, who was joined on stage by Andrea Bandelli, executive director of Science Gallery International, and Peter Linett, chairman and chief idea officer at Slover Linett Audience Research and founder of Culture Kettle, an accelerator for knowledge and progress in the cultural sphere.

Durant reviewed the background of the “public understanding of science” concept, noting that it came to be seen, pejoratively, as the “deficit model,” in which well-meaning scientists and science communicators like science centers with “metaphorical megaphones” would try to get people who didn’t know about science to pay attention, listen, and learn about scientific concepts.

There were calls to replace this approach of transferring knowledge from those who know to those who don’t with something radically different that would include listening as well as speaking on the part of those who wanted to communicate about science.

Our field saw a great deal of excitement about this new model, which would include two-way communications, dialogue, and interactions that came to be known as a “public engagement with science” model. The enthusiasm for promoting “public engagement” became so strong that funders were not even approving anything that had a “public understanding of science” label, and everyone switched over to an “engagement” model.

However, not much actually changed, Durant noted. There were some interesting new dialogue-based initiatives, but mostly existing communication methods just got repackaged as “engagement.” This is partially because no one agrees on the definition of “engagement.” Some think of it as collaborative decision-making and others as a genuine meeting of minds, while for others “engagement” could mean a simple panel discussion, or even just adding a question-and-answer session to the end of a lecture.

Also, there is also no clear agreement on the purpose of “engagement”—it could be anything from involving people in the formation of civic policy to teaching students in school to evaluating if institutional public relations messages are working as intended.

Durant said that in this environment, where science centers are promoted as places for “public engagement with science,” most of the activity is concentrated on the old standbys: science, technology, engineering, and math (STEM) education; curriculum; and schooling. But an unresolved issue with pursuing “engagement” in this way is that the world in which our audiences live isn’t just about those more formal things. The public is faced with issues that are challenging, controversial, scary, and contentious.

Linett, a cultural-audience researcher, who works with arts organizations, museums, public media, and foundations, suggested that academic science communication researchers “may be hung up on this in a way science centers are not.”

He noted that no one seems to be researching how science is connected to the broader contemporary culture and suggested we need to contextualize the learning frame we have, which is what many science communicators are doing, including Neil deGrasse Tyson with his StarTalk radio show and Guerilla Science with their events and installations.

Researchers could help science centers and other communicators identify people who are interested in science—“people who dig this stuff”—and help them embed science into daily living, Linett said. He gave many popular cultural examples of the general public embracing science, including in comedy (Steve Cross in the United Kingdom); entertainment (the recent films Interstellar and The Martian, and the Big Bang Theory television show); science talk shows and storytelling (Brian Cox in the United Kingdom, and Tyson, Brian Greene, and the Story Collider in the United States); and social events such as Nerd Nights.

In society, in general, Linett noted, public engagement is emerging as phenomenon, affecting many fields beyond science. There are remixes and mashups enjoying success all around us. Politics is now blended with comedy and talk shows in a way Johnny Carson would never have imagined, on shows like those of Jon Stewart, Stephen Colbert, and Bill Maher.

Linett shared some characteristics of how “public engagement” is in the midst of moving from more traditional models to newer ones:

Bandelli, whose doctoral research focused on science centers as a platform for scientific citizenship, proposed some areas to consider when we evaluate our individual and collective impact on “public engagement with science”:

What do science centers get from “engagements” with the public? If it is a true two-way conversation, engagement includes what we learn from the public. After getting that knowledge, do we actually transform our way of doing things?

There is a solid body of academic, peer-reviewed literature about public involvement, and museums are almost invisible in this. The main journals of science communication and public understanding of science don’t cover science centers’ activities and results very often. To have impact on public policy in science, our field needs to be better known for what it can bring to the table.

There is a big imbalance between what science centers publish in the realm of science education and what they actually do in “public engagement.” We could not only focus on education, but also talk more about our engaging activities and their impact.

Our field is self-referring, with little space for outside voices to be heard.  It’s dominated by people in the field, as many conferences and journals are, but specific efforts should be made to find voices that offer a critical input on the work we do. We need that critical assessment from the outside, and it would be beneficial to hear from those stakeholders and participants on why science centers are ignored in policy discussions.

Science centers have earned a place at the policy table, and though it’s difficult to get included because we’re not well known, it is happening slowly in Europe, in a limited way, with short-term projects.

There is a positive and measurable effect between perception of the public that science centers play a role in public policy and their interest in participating in discussions. Likewise, the less awareness there is, the less interest there is in participating.

Science centers can have a role in policy. They can be political and active in defining the type of society we want to live in, which encourages people to participate.