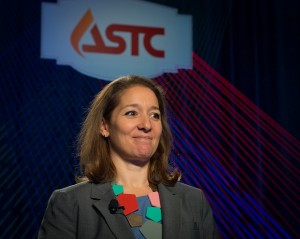 On Monday morning, ASTC launched the Alan J. Friedman Science Center Dialogues, discussions presented in the spirit of the commitment that Alan had to our field and the issues and interests that were reflected in his own writings and presentations over the years. This year’s presenter was Sarah Wolman from the LEGO Foundation; Peggy Monahan from the New York Hall of Science served as moderator.

Monahan opened the conversation by talking about the role of play in science centers. Play is often the first powerful tool in the engagement of visitors. She invited Wolman to share LEGO’s research on play and asked how science centers can contribute to that work. (See a PDF of Wolman’s presentation slides here.)

The LEGO Foundation is seeking to redefine play and reimagine learning in order to create a future in which kids are empowered to play and learn. It is concerned with perception of play, though. In the current push for more academic learning and younger ages, play has an image problem. Proponents of learning through play are under pressure to prove play is effective.

Play has been shown to help develop skills including attention span, self-control, and spatial reasoning. The five types of play (physical play, play with objects, symbolic play, socio-dramatic play, and games with rules) all support development of physical, social, emotional, creative, and cognitive competencies, and perhaps most importantly, executive function. LEGO Foundation is focusing on guided play as it has been shown to be more effective in learning. (To read more about this research, visit the LEGO Foundation website.)

As for how science centers can effectively advocate for play, Wolman stressed that mindset and attitude change leads to behavioral change. We need to think about how to open people’s minds to what great learning looks like and offer a competing notion of great learning to the one of attentive students in desk. She also discouraged phrases such as praising activities as being “so fun, they didn’t know they were learning.” Learning is not something that should be hidden or that we are trying to trick kids into doing.