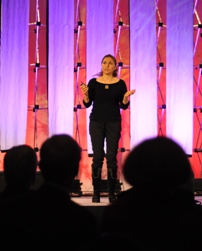 Technology innovator, entrepreneur, philanthropist, and space explorer Anousheh Ansari gave the keynote address, entitled “Science Centers as Agents of Change,” at the ASTC Annual Conference on October 31. Deeply committed to bringing people together for social change, Ansari spoke of the great potential she sees in science centers for inspiring curiosity, creativity, and action on societal issues.

“One thing we need to do is make sure we cultivate imagination in young kids,” Ansari said. “Science centers are wonderful, wonderful places to do that.”

When Anousheh Ansari immigrated to the United States from Iran as a teenager, she did not speak English. Within a few years, she had earned a degree in electronics and computer engineering and a master’s degree in electrical engineering. Since then, she has launched two technology companies and made headlines as the first female private space explorer, traveling to the International Space Station with Russia’s Soyuz TMA-9 mission in 2006. As an active proponent of world-changing technologies and social entrepreneurship, Ansari works with organizations like ASHOKA and the PARSA Community Foundation to support social entrepreneurs. The Ansari family provided the title sponsorship for the Ansari X Prize, awarded in 2004 to the first nongovernmental entity to launch a reusable manned spacecraft (SpaceShipOne) into space twice within two weeks.