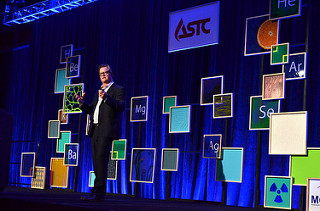 Earlier today, Alex McDowell, an award-winning narrative designer who works at the intersection of design, technology, and storytelling, helped kick off the 2016 ASTC Annual Conference by delivering a keynote address at the Opening Plenary Session in the Tampa Convention Center.

In keeping with the “storytelling” aspect of this work, McDowell, whose current credentials include serving as the founder and creative director of Experimental Design, professor of practice at the University of Southern California’s (USC) School of Cinematic Arts, and director of the USC World Building Media Lab and the World Building Institute, offered attendees a glimpse into new worlds through a series of “case studies” that highlighted his work and the ideas and thoughts behind it.

McDowell began the presentation by describing the fascinating process behind the creation of a year 2054 version of Washington, D.C., for the Tom Cruise film Minority Report—from the directive to envision a place that reflected a “future reality” rather than “science fiction,” to the meetings he and his colleagues had with scientists, schools, and science museums to gather ideas about how the world of the future would look. McDowell noted that the film was the first that featured a fully digital art department, and shared with attendees the fact that the design of the world actually preceded the creation of the story/film in which it would eventually exist. Among the technological breakthroughs that appeared in the 2002 film before they actually made their way to the marketplace and part of our daily lives? Facial recognition technology, driverless cars, robotic insects, and over 100 others—an impressive list. “It wasn’t that we were being so clever, we were just listening to the experts” who were studying this 15 years out, McDowell said.

Additional case studies highlighted included “Leviathan,” a bio-system for the future of storytelling (“We flew an 80-foot whale over 5 thousand people” using “smoke and mirrors”); “New City,” a community comprised of the entire population of the world; and work for the Al Baydha Development Corporation, which addressed the creation of a sustainable community.

McDowell concluded his presentation by sharing with the audience a quote from Buckminster Fuller: “You never change things by fighting the existing reality. To change something, build a new model that makes the existing model obsolete.”