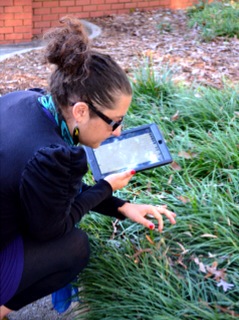 Even before the official start of ASTC 2014, attendees were outside having fun and doing science in Citizen Science Boot Camp. The Friday morning workshop was designed to give participants tools they can use to build their own visitor-centered citizen science programs.

Participants split into groups to “bioblitz” two downtown Raleigh parks, collecting data using iNaturalist, a free mobile app that helps users record and track observations. The groups then analyzed their data, creating graphs of the major taxa for each park—birds, mammals, insects, herbaceous plants/wildflowers, trees, fungi, and “other.” They also discussed how historic differences in the once racially segregated parks might have influenced biodiversity. The workshop ended with an overview and discussion of program evaluation tools.

About the image: In Citizen Science Boot Camp, participants “bioblitzed” local parks and logged their findings using a mobile app.