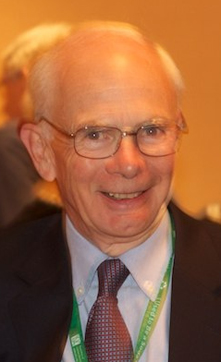 On Saturday, October 15, Colin Johnson became the newest recipient of ASTC’s highest honor, the ASTC Fellow Award for Outstanding Contribution. At the 2011 ASTC Annual Conference in Baltimore, ASTC immediate past president Lesley Lewis presented the award to Johnson, former director and CEO of Techniquest in Cardiff, Wales, United Kingdom, “for his distinguished career as a chemist and educator, from the classroom to the museum. Colin’s determined advocacy, tactful diplomacy, and persuasive compositions have helped build bridges within the field and between science centers and the people they serve. His generosity and dedication know no limits.”

As he accepted the award, Johnson urged science centers to stay true to their missions, citing the Saint Louis Science Center’s mission statement to “open every mind to science.” He also stressed the importance of science center networks and collaborations, saying “We are truly a global family, grasping similar opportunities and meeting similar challenges.” Johnson concluded by reminding attendees that “the [staff] in your science center will always be your greatest asset. Look after them well.”

The ASTC Fellow Award for Outstanding Contribution, first presented in 1974, is bestowed upon individuals who merit special recognition for their significant contributions to the advancement of public understanding and appreciation of science and technology or of ASTC itself.