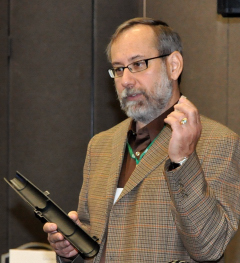 Galileo Galilei’s observations of night skies through a telescope helped change the perception of Earth’s role within the universe. Four hundred years later, the International Year of Astronomy 2009 is celebrating by working to put telescopes into the hands of as many people around the world as possible. A team of astronomers, optical engineers, and educators have designed the Galileoscope, an inexpensive, high-quality, easy-to-use refractor telescope that is powerful enough to allow users to examine lunar craters and mountains, Saturn’s rings, and countless stars invisible to the unaided eye.

In “Galileoscopes Around the World,” a November 3 session at ASTC 2009, attendees learned about collaborative skygazing that is happening around the world with the new telescopes. So far, 110,000 Galileoscopes have been produced and distributed, many through programs including ASTC’s Twinning project. After learning about the Galileoscopes and how they are being incorporated into programs, participants had a chance to try using one. They also were given the opportunity to apply on behalf of their institution for 100 free Galileoscopes to use with their visitors and teachers.

About the image: Stephen Pompea demonstrates how to assemble a Galileoscope.