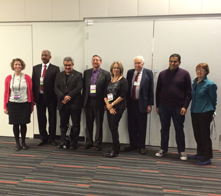 In the extended Sunday morning session “Emerging Science Centers in Africa: Learning as a field, four years after Cape Town,” Ronen Mir of Schwartz/Reisman Science Education Centers, Weizmann Institute, Rehovot, Israel, led an international panel that explored the future of science centers in Africa and how the field has expanded in recent years. In 2011, when the Science Centre World Congress was held in Cape Town, South Africa, there were no science centers in the region between North Africa and South Africa. Today in Ethiopia, for example, there are 13 science, technology, engineering, and math (STEM) centers.

Mir gave the first presentation, describing the development of the field in Africa as a model for other areas of the world where science centers are still lacking. He presented a three-part model: 1) partner with a top-notch local university that provides a building, staff, and resources; 2) find a supporter to set the vision and provide funding; and 3) develop interactive exhibits that are in tune with community’s needs and heritage and that value indigenous and local knowledge.

Both Mir and the next presenter, Alemayehu G/Egziabher Abera of Addis Ababa, Ethiopia, spoke about the development of science centers in Ethiopia over the past four years, and the mutual exchange between museums in Israel and Ethiopia. Abera also announced plans for a science TV show that will soon be launched in Ethiopia to reach an even wider audience.

Next, ASTC’s Walter Staveloz discussed some of the challenges and opportunities facing science centers in Africa, including lack of resources, transportation, public education access, and electricity. Staveloz cited an example of a small but very active science center in South Africa, which he says performs “miracles” on a budget of just $8,000 a year. Many children in Africa perceive science as a tool for a better life, he said, and they want to grow up to become scientists who will improve agriculture and food security and address public health issues. “You have to take that into account when building a model in Africa,” he said. “You can’t just build a model that reflects what we do in the rest of the world.”

In Egypt, MultiMedia—Academy of Scientific Research and Technology is striving to move away from a one-size-fits-all education system to one based on the theory of multiple intelligences, where students engage in science through art, music, sports, business, or other modules in which they naturally excel. Ahmed El-Sayed discussed a variety of the MultiMedia’s programs, including science festivals and the Egyptian Program for Scientific Explainers.

Gillian Thomas of the Patricia and Phillip Frost Science Museum in Miami spoke about the future goals of the ASTC Global Committee, including plans for the ASTC Lee Kimche McGrath Worldwide Fellowship, the Science Centre World Summit 2017 in Tokyo, and a proposed International Year of Science Centers in 2019. She asked for input from attendees on the future directions of these initiatives.

Thomas’s colleague, Jennifer Santer, next gave examples of STEM projects that might be models for new projects in Africa, including partnerships between the Frost Museum and colleagues in Colombia, Jamaica, and Jordan. She advocated for an organic, grassroots approach, including training informal science educators and implementing youth exchange programs. A successful project should be replicable and sustainable, should draw upon strong relationships with effective local partners that are well connected to target audiences, and should couple science learning to tangible benefits that relate to communities’ immediate interests.

Following the presentations, attendees broke into small groups to discuss their own experiences with the development of science centers in Africa and other regions and their thoughts for the future.

About the image: Presenters and colleagues at the Emerging Science Centers in Africa session. Photo by Emily Schuster