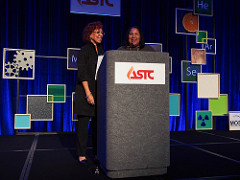 ASTC Global Committee Co-chairs Chevy Humphrey of Arizona Science Center, Phoenix, and Silvia Singer of MIDE, Museo Interactivo de Economía, Mexico, D.F., Mexico, rallied ASTC 2016 attendees to declare, “I’m In!” at the official launch of International Science Center and Science Museum Day (ISCSMD) this morning at ASTC 2016 in Tampa, Florida. ISCSMD will take place on November 10 and is organized by ASTC with the United Nations Educational, Scientific, and Cultural Organization (UNESCO) and the International Council of Museums (ICOM). Science centers and science museums in every part of the world are invited to offer activities based on one or more of the 17 Sustainable Development Goals (SDGs) declared by the United Nations (UN), and to participate in a worldwide science experiment.

“This day is the first of its kind,” said Humphrey. “We’re so excited to show the world our impact when addressing global issues.”

Singer encouraged attendees to register their ISCSMD events on an interactive map, which was unveiled this morning. “If you’re not on the map, you’re not in, and you need to be in,” she said. Singer pointed out that most science centers and museums already have programs addressing the SDGs, so it is not necessary to create a new program to participate in the event.

Several science center representatives in the crowd shared how they plan to celebrate ISCSMD. Kenneth Monjero said that Science Center Kenya, Nairobi, will hold events at the science center, a rural school, a public marketplace, and a home for orphans. Sophie Biecheler of Universcience, Paris, explained that the center will leverage its many existing exhibitions and activities that already relate to the SDGs for ISCSMD.

“November 10 is a gift,” said Graham Durant of Questacon, Australia’s National Science and Technology Centre, Canberra. “The SDGs are core values of science centers. This is an opportunity for us to step up together to make a real contribution . . . On our own we’re brilliant but together we’re awesome. Go for it!” 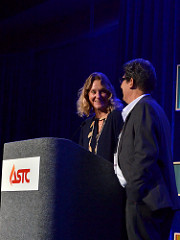 Next ASTC’s Walter Staveloz introduced Anne-Catherine Robert-Hauglustaine, director general of ICOM, who expressed her enthusiastic support for ISCSMD, saying, “When [ASTC’s] Walter [Staveloz], Bud [Rock], and Linda [Conlon] said, ‘What do you think?’ I immediately said, ‘Of course, we’re in!’” 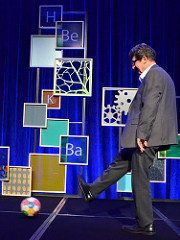 As the launch event drew to a close, Staveloz drew the name of the winner of a limited edition soccer ball from the United Nations, emblazoned with the SDGs. He then kicked the ball to Linda Tsai, who accepted it on behalf of San Jose, California’s Tech Museum of Innovation.