The 2016 ASTC Annual Conference officially kicked off this morning with a lively and inspiring opening session that included an “artistic astronaut,” a call for science centers and museums to embrace migrants and refugees, a look at the future of storytelling, and even a rowdy crew of pirates.

Anthony (Bud) Rock, ASTC’s president and CEO, and Molly Demeulenaere, president and CEO of ASTC 2016’s host museum, the Museum of Science and Industry in Tampa, opened the session by welcoming more than 1,500 attendees from 45 countries worldwide. Demeulenaere then introduced Nicole Stott, who grew up Clearwater, Florida, and is known as “the artistic astronaut” because she was the first person to paint a work of art in space. In her 27-year career with NASA, Stott flew two spaceflight missions, including a long-duration mission on the International Space Station (ISS). Now retired from NASA and working as an artist, Stott is part of the Space Suit Art Project—a collaboration among MD Anderson’s Pedatric Cancer Center, NASA Johnson Space Center, and space suit company ILD Dover—which enables pediatric cancer patients create colorful space suits. Kate Rubins, a NASA flight engineer, recently wore one of the children’s hand-painted flight suits, entitled “COURAGE,” on board the ISS.

Linda Conlon, ASTC’s board chair and chief executive of the International Centre for Life, Newcastle upon Tyne, England, United Kingdom, next took the stage to discuss why science centers must engage with refugees and migrants and rethink their business models if they are to survive and meet the needs of future audiences. Her key themes included

“Over 65 million people in the world today have been displaced by conflict and persecution. Immigration is causing large societal changes that play out in specific, tangible ways in our respective communities,” Conlon said, adding that science centers “have a duty to engage with new members of our communities, wherever in the world they might be.”

Conlon then invited all attendees to participate in the first-ever International Science Center and Science Museum Day on Thursday, November 10—organized by ASTC with the United Nations Educational, Scientific, and Cultural Organization (UNESCO) and the International Council of Museums (ICOM).

Engaging deeply with increasingly diverse audience “is not an optional box-ticking exercise,” Conlon concluded. “It’s time to wake up and smell the coffee—wherever the beans come from. Science has the power to be a unifying force. Let’s not miss this opportunity to make a difference.” Conlon’s address is available here.

The opening session continued with the announcement of the 2017 World Biotech Tour stops and a fascinating keynote presentation by award-winning narrative designer Alex McDowell. As the session ended, a group of costumed pirates led attendees upstairs to the ASTC 2016 Exhibit Hall.

See a slide show of today’s activities, including the opening session, below. 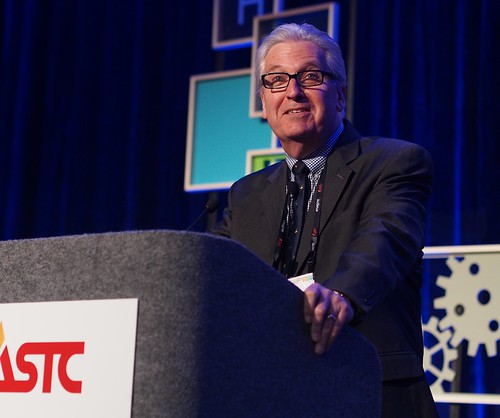