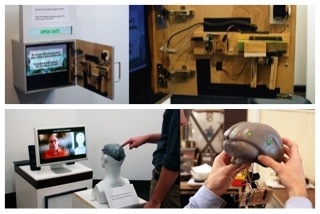 This morning’s Prototyping with Arduinos Workshop, sponsored by Radio Shack, gave ASTC 2012 attendees a chance to try their hands at digital programming using Arduino, an open-source physical computing platform based on a simple microcontroller board. Because the hardware and software are open source, Arduino can be used to create inexpensive interactive exhibits, and an abundance of free resources for the platform are available online.

Session leaders Brian Kelly, Eric Welch, and Kyle Stetz from The Franklin Institute shared examples of how they have used Arduino in their own exhibit prototypes. Participants were then led through progressively more complex programming activities beginning with blinking a single LED (the Arduino version of “Hello, World”).

About the images: Prototype developers at The Franklin Institute have used Arduino boards to create stand-alone projects, such as a safe that visitors can open by entering a code (top). Other projects use Arduino boards to communicate with software including an exhibit where a video changes as visitors “turn off” different areas of a brain (bottom). Images courtesy The Franklin Institute