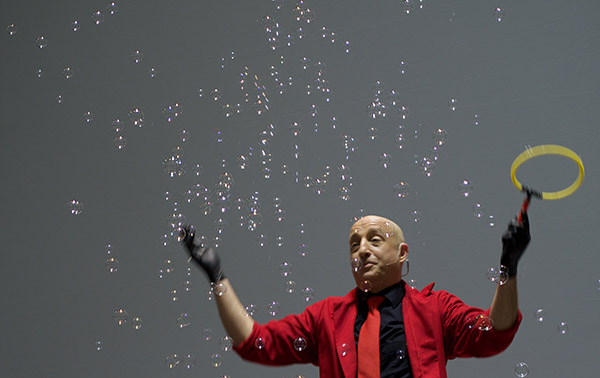 This year the ASTC Live Demonstration Hour was an early riser. So were the several hundred avid attendees who, despite the 9:00 a.m. start, gave venerable Master of Ceremonies Eddie Goldstein and his demonstrative crew a warm, Sunday-morning welcome at the Exhibit Hall Stage. 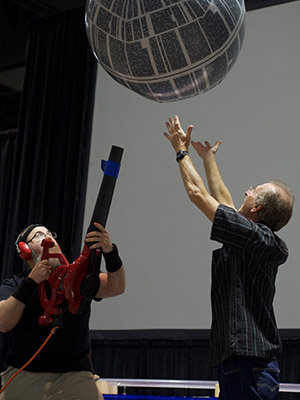 Goldstein has been corralling gregarious hosts for the Demo Hour for, he thinks, about 30 years. “No one really knows how long,” he said before the show.

This year Bubbleologist Casey Carle kicked things off with a master class in showmanship and the physics and beauty of bubbles. He created a rarely seen cubic bubble and offered a musical finale surrounded by a symphony of floating soap under his careful command.

Next up, veteran Live Demo Hour Presenter Paul Taylor, the Traveling Show and Community Outreach Manager for The Franklin Institute in Philadelphia, took Bernoulli forces big time and suspended a Death Star above the stage in a remarkable display of control and physics. Taylor told the crowd that when he was a kid seeing a Bernoulli demo was the spark that lit a fire in his heart for science. 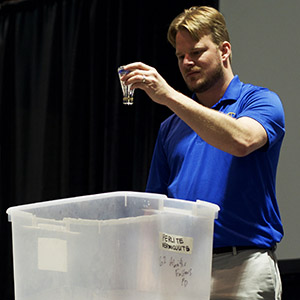 In a rare, serious moment Goldstein then appealed to the crowd to commit to connect with someone with an opposing point of view to try to understand that perspective. He also said he was inspired by ASTC Keynote Presenter Ed Yong’s message of diversity and inclusion to ask something he’d been thinking of doing for years. He asked especially for women, people of color, and international presenters to let him know if they wanted to be included. Goldstein said that in the past he felt that call might be seen as tokenism. “Thank you to Ed Yong for giving me permission,” he told the crowd.

Michael Aguinaga, the Public Programs Manager for the Museum of Discovery and Science in Fort Lauderdale, Florida, then demonstrated that water can be sticky, by suspending a water-filled beaker upside-down without spilling a drop—thanks to surface tension. Then, using two cannonballs and aluminum foil, Aquinaga ended his presentations by sparking a thermite reaction.

But the real bang-up ending was from Andrew Fotta, a STEM Educator with the host of the conference, the Connecticut Science Center. Fotta wrapped up a presentation on air pressure by blasting a ripe watermelon to smithereens, peppering the front-row audience members with a hail of seeds and pink pulp. (The had been provided with rain ponchos in advance, though no information about why.)

Goldstein told the crowd that, for the first time, instructions and parts lists for all these demos will be available on the ASTC website following the conference. Check back here for details in a few weeks.