Matt Fleury may be president and chief executive officer of the Connecticut Science Center, but he’s also a talented musician. At the opening breakfast for the ASTC 2018 Annual Conference yesterday, conference attendees enjoyed bluegrass music as they ate their scrambled eggs and bacon. At the end of the set, Fleury set down his banjo, put on his jacket, and strode to the podium to welcome the crowd and kick off the opening program. ASTC got a chance to talk to Fleury afterwards.

What’s the name of your band?

We call ourselves the Restless Mountain Bluegrass band. 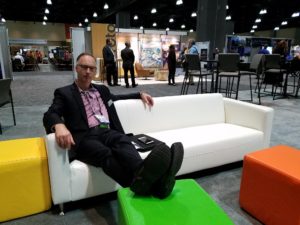 How did you all get together?

The band has existed in various configurations over the years and I’ve known the guys involved. I reentered the bluegrass world about three years ago after a 20-year hiatus and reconnected with these guys. It turned out they needed a new banjo player so I jumped in. Before I knew it, I was singing songs—which I had not done before—as well as playing, and really having a wonderful time.

Blue grass is a little unusual for Connecticut, isn’t it?

Bluegrass is an Appalachian and southern, sometimes southwestern game, but there’s bluegrass up north and some wonderful musicians, very active in cities like Boston and here in Connecticut and Vermont and New Hampshire. There are a lot of northeastern bluegrass musicians and it’s fun to be part of that.

Music and science intersect in many different ways. Are any of the other guys in your band scientists or connected to science in any way?

We have a retired lawyer, an IT director… But the banjo is an interesting instrument. I’m not an engineer, but it’s said that engineers tend to gravitate towards the banjo, partly because it’s an unsolvable mystery as a five-string instrument, one of which is shorter than the other four, tuned in a chord, played typically in 4/4 time with three fingers. So the sheer math of playing bluegrass banjo is a mystery to most of us who just figure out how to play it. It’s a tinkerer’s instrument—for those who like to tinker—because there are a lot of moveable metal and wood parts. So it is an instrument that engineers tend to gravitate towards, though that’s not what draws me to it.

Besides playing at science conferences, where else do you perform?

We play at local bars and restaurants, concert halls, weddings, business functions, for one another. We play a couple of times a month. It’s a sidelight for all of us and we really have a wonderful time.