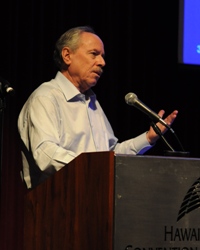 Science centers are ideally positioned to help scientists communicate and engage in dialogue with the public, according to Alan I. Leshner, CEO of the American Association for the Advancement of Science and executive publisher of Science. Leshner presented a special session entitled “Scientists and Science Centers: A Great ‘Glocal’ Partnership Opportunity” at the ASTC Annual Conference on October 2.

Science centers are experts in public engagement and communication, as well as in “glocalization”—taking global issues and making them locally and personally meaningful, Leshner said. They can help scientists communicate their research in understandable and relevant ways and provide a venue for scientist–public interactions. Meanwhile, researchers can enhance science center programs by contributing their expert content knowledge and by giving the public an opportunity to interact with real, live scientists.

Such efforts are important because, as Leshner said, despite high public interest in science, many people are uncertain of its relevance to their everyday lives. In addition, tensions between science and the rest of society can result from conflicts between scientific advances and some religious values (as in the case of embryonic stem cell research) or political or economic issues (as in the case of climate change).

“Scientists are starting to learn that they can’t do public engagement by themselves,” Leshner told the audience of science center professionals. “We need experienced partners, and that means you.”