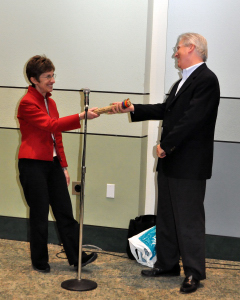 After four days of sessions, keynotes, demonstrations, and museum visits, the 2009 ASTC Annual Conference closed with the “passing of the baton” from retiring executive director Bonnie VanDorn to new CEO Bud Rock. Rock comes to ASTC from Arizona State University, where he served as vice president for global engagement. Prior to that, he had a 25-year career at the U.S. State Department that culminated with a five-year appointment as acting assistant secretary and principal deputy assistant secretary of state responsible for oceans, environment, and science.

About the image: Bonnie VanDorn “passes the baton” of leadership to Bud Rock at the closing luncheon of the 2009 ASTC Annual Conference. Photo by Christine Ruffo