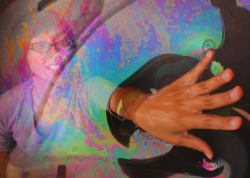 As the 40th anniversary of the Exploratorium approaches, the ExhibitFiles online community is celebrating the life of the San Francisco museum’s founder Frank Oppenheimer by inviting contributions inspired by his work.

One of Oppenheimer’s lasting legacies in the informal science education field is a recognition of the intimate connections between science and the arts. As he once wrote: “There are many common bonds between science and art. They both begin with noticing and recording patterns—spatial patterns, patterns in time, patterns of process and behavior. They both elaborate, reformulate, and ultimately link together patterns, in nature and meaning, which initially appeared as unrelated. Both art and science are involved with order-disorder transitions and the creation of tension and the relief of tension. Both endeavors are deeply rooted in culture and heritage; both expand our awareness and sensitivity to what is happening in nature, and in ourselves.” (More)

In a recent review on the ExhibitFiles site, exhibit developer Tom Nielsen remembered some of the Exploratorium’s classic exhibits, including Soap Film Painting (pictured). “Scientists surpass even kids and dolphins in curiosity,” he comments; “no wonder then that Leonardo and Newton and Oppenheimer would be drawn to such ephemeral phenomena, shimmering fragile structures built of only liquid and gas.”

To join the ExhibitFiles site and learn more, click here. Outstanding contributions will be honored during an ExhibitFiles event at the 2009 ASTC Annual Conference in Fort Worth, Texas, on Friday, October 30. KC Cole, author of a recent biography of Frank Oppenheimer, will be there to give the winner a copy of her book and share recollections of one of the most influential founders of the science center field.