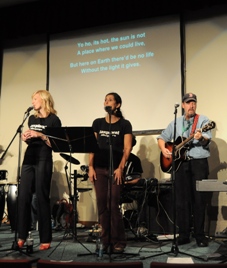 “REDOX, that’s a chem. abbreviation,
REDOX, it means reduction-oxidation
That’s what’s got you down, nearly driving you insane,
It happens when electrons are lost and gained.”

The sounds of songs like this one drifted out from the session “Science in Song” at the ASTC Annual Conference on October 31. Three science center bands shared their music and experiences, and session participants were invited to sing and play along using lyrics sheets and rhythm instruments. Exploraband from Explora in Albuquerque, New Mexico, specializes in songs about science and math in genres ranging from blues to swing. Jim Taylor & Friends, a band from the Health Adventure, Asheville, North Carolina, plays original songs about science topics including momentum, electricity, gravity, and the history of science. The band from the Oregon Museum of Science and Industry (OMSI), Portland, has performed for very young children using fanciful instruments created by OMSI staff. One such instrument, the Toolaballoonophone, is a set of tuned mechanic’s wrenches played like a xylophone. Session presenters included Paul Tatter from Explora, Jim Taylor from the Health Adventure, and Ray Vandiver from OMSI.

Meanwhile, on the opposite side of the convention center, a diverse group was also exploring ways of using performance to teach about science. Designed for those who perform in shows, demonstrations, and plays at their science centers, the active workshop “Performance Techniques for Science Center Professionals” helped participants strengthen their skills in acting, movement, voice, and showmanship. Participants learned how to develop a character, find a storyline, manage an audience, project their voices, use facial expressions, work with props, and convey excitement and enthusiasm even after doing the same show 1,000 times. The hands-on class was led by Eddie Goldstein of the Denver Museum of Nature and Science, Colorado; Stephanie Long of the Science Museum of Minnesota, St. Paul; and Heather Barnes of the Museum of Science and Industry, Chicago.

About the image: Musicians from Explora, Health Adventure, and OMSI present “Science in Song.”  They will also perform tonight at the conference banquet. Photo by Christine Ruffo