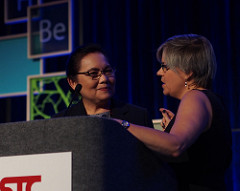 The World Biotech Tour (WBT), organized by ASTC and the Biogen Foundation, will journey to five countries on three continents in 2017, bringing the total number of WBT stops to 12. Each WBT stop hosts a science festival centering on biotechnology, and student ambassadors at each site research and present a biotechnology topic and facilitate Lab-in-a-Box activities.

At the ASTC 2016 opening session this morning, Gena Renfrow of the Biogen Foundation announced the final five WBT stops and recognized a representative from each site:

Before announcing the new sites, Renfrow interviewed Aphiya Hathayatham, vice president of the National Science Museum Thailand, who called the WBT a “good model for STEM [science, technology, engineering, and math] education” and “an eye- and mind-opener for biotechnology.”

“All of us here today want young people around the world to know that science is fun, science is for everyone, and you can change the world through science,” said Renfrow. “That’s why ASTC and Biogen are working together to bring the World Biotech Tour to 12 science centers across the globe.”

In addition to the 12 scheduled stops on the tour over the three years of the program, all museums have access to resources necessary to host their own event, free of charge, on the WBT website.

About the image: Gena Renfrow of the Biogen Foundation (right) interviews Aphiya Hathayatham of the National Science Museum Thailand. Photo by Wayne MacPhail