A Science Center and a Community: Cultivating Hope and Resilience in Medellin 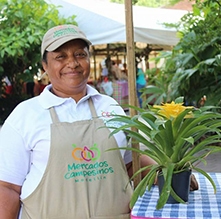 By Claudia Aguirre
From Dimensions
January/February 2016

Today’s science centers are becoming more aware of changes in their local contexts and are concerned about playing a role in building and contributing to society. The Mechelen Declaration, resulting from the Science Centre World Summit 2014 held in Mechelen, Belgium, clearly expresses this commitment with two of its goals (SCWS, 2014):

1. “We will investigate how to engage even more effectively with local communities and increasingly diverse audiences.”

2. “We will take the lead in developing the best methods for engaging learners and optimizing their education in both formal and informal settings using appropriate technologies in widely varying contexts.”

These goals have particular significance in societies marked by tragedy and conflict, where residents can find hope for transformation only through education and cultural expression. This is the case in Medellin, a city in the central Andes, northwestern Colombia.

From fear to hope

Medellin has a strong tradition of entrepreneurship, and with its pleasant weather and August Flower Fair, it has been nicknamed “the city of eternal spring,” “the capital of the mountain,” and “the city of flowers,” among others. However, in the late 1980s, because of the Medellin Cartel and its cocaine trafficking, the city became known worldwide as “the city of eternal shooting,” “the most violent city in the world,” and “Metrallín” (a play on Medellin and the Spanish word for machine gun: metralleta).

For years, residents of Medellin faced the consequences of living in this atmosphere of hopelessness and fear. The cartel and its actions (against the police and other cartels) disregarded the presence of civilians, who turned out to be the most affected by this situation. Thousands of paisas (the people born in this region) migrated, fleeing the violence. Those who remained had to live in this climate of uncertainty with such consequences as no longer valuing life, mistrust among citizens, and disinterest in the world. Also, a national armed conflict, many decades old, brought forced displacement, crime, and other forms of violence exerted by diverse actors.

In 2004, the city began urban renewal policies aimed at restoring peace and equality among residents. A group of politicians with academic backgrounds spearheaded an educational program, which included building facilities such as libraries, schools, and parks. The goal was to promote education and culture to transform Medellin “from fear to hope,” the title of a government plan for the city (Alcaldía de Medellín, 2004).

From science to community inspiration

In this context, the science center Parque Explora opened in 2007 with a mission “to inspire, communicate, and transform by means of interactive scenarios that contribute to the public appropriation of the scientific, technological, and social knowledge necessary to build a better society.”

In fulfilling its mission, Parque Explora developed a social management program, which initially worked with its immediate neighbors, the residents of the Moravia sector, and later expanded to include the entire city. This program develops projects to foster the understanding of science and technology within and outside the museum’s facility, strengthens bonds with its neighbors, and contributes to an increase in digital and technical literacy among residents. Projects are conceived and designed with community participation to focus on issues important to them.

From one woman to another

In one project, started in 2011, Parque Explora helped women living in the Moravia sector to form a group called Invisible Women. We wanted to talk with these women about sexual and reproductive health (we knew there were a lot of problems concerning this issue), but initially it wasn’t easy to persuade them to attend, until we hit on the idea of sharing recipes.

The result of this project was an exhibition held at Explora in 2012 and titled One Thousand and Five Nights, consisting of four women’s stories turned into tales of the Arabian Nights. The artist who proposed this exhibition took professional photographs in which the women were represented as characters in Scheherazade’s imagination, to accompany their stories.

All the tales take place on a haunted mountain with a dragon in its gut (Moravia Hill, a mountain of garbage on which the women lived; see below), and each story highlights the women’s qualities and history: their cooking skills, their origins, their children, the reasons for their displacement, and the problems they faced and surpassed.

The Invisible Women group continues to meet as part of Explora’s neighbors program, and some of the women also participate in our courses and workshops.

From garbage to flowers

Another flagship community project involved transforming the 114-foot-high (35-meter-high) Moravia Hill, which was made up of garbage, having been the municipal dump in the 1970s and 1980s. Thousands of families, displaced by conflict or attracted by the dynamics of growing urbanization, lived on the hill and made waste recycling their means of subsistence. The inhabitants of Moravia were exposed to steep slopes and unstable soils; poorly constructed buildings; industrial, clinical, and domestic waste; and continuous release of toxic gases and leachate.

In 2011, the region’s environmental control agency and the municipal office for Moravia combined efforts and, along with various institutions and the community, began transforming the hill into the main public garden in Medellin and finding alternate housing for the residents.

Parque Explora ran workshops and used social cartography to educate community leaders, mainly women, about the scientific, technological, and health implications of the projects. (Social cartography empowers communities to create maps that help them to analyze local social issues and develop and advocate for solutions.) These community leaders then helped the rest of the community understand why they could no longer live on the hill. (For more about this project, see Aguirre, 2014.) The leaders also founded a gardening cooperative, Cojardicom, to grow and sell ornamental plants, and today this provides income for a few people.

From knowledge to building a better society

Since 2014, Parque Explora and the municipal office for youth have worked together in different parts of Medellin in a project called Expanded Territory to empower young people to share knowledge, be creative, and participate in workshops about one of four themes: social cartography, biodiversity, communications, and creative electronics. We then facilitate a Projects Laboratory, in which participants identify local problems to work on and use the ideas and results they learned during the themed workshops to manage projects collaboratively and propose solutions to the problems they’re tackling.

For example, a group from the Esfuerzos de Paz (“peace efforts”) neighborhood learned social cartography skills that allowed them to develop different, more positive relationships with their neighbors and create maps showing where they live (since their homes were built informally and aren’t recognized by the city). Thanks to Projects Laboratory, they also submitted to a proposal call and obtained resources to develop their own ideas for mapping and better understanding their territory—their immediate neighborhood and the places they go day-to-day.

In addition to training youth in knowledge and project skills, the Projects Laboratory allows us to promote good citizenship practices and scientific skills. Through discussions and analysis of local issues, the youth are involved in dialogue, listening, expression of their ideas, and respect for other’s ideas, all of which are elementary aspects for positive coexistence.

In another, similar project, Parque Explora and the Municipality of Medellin are currently building a large maker space called the Collaboratory, scheduled to open at the science center in July 2016. The Collaboratory will allow us to continue building trust between the science center and Medellin’s communities and encourage two-way exchange of knowledge and ideas. This combined workshop and citizen laboratory will be open to all residents of Medellin and will be equipped with tools and spaces for research, experimentation, and collective creation in different fields. With the Collaboratory, we acknowledge that in today’s society, where many people are “prosumers” (both consumers and producers of content) and are interested in taking an active role in their own learning, science centers continue to play a fundamental role in building a better society.

Medellin is rewriting its history. Many people and institutions are involved in this reconstruction, and today, Medellin has become an example of resilience and reconciliation for the world. The importance of a science center like Parque Explora in this process is related to facilitating informal educational opportunities, strengthening the scientific and citizenship skills of residents, and helping people recover self-confidence through participation in projects that will contribute to their community. Inevitably, to build a better society is to build a society of shared knowledge.

REFERENCES
Aguirre, C. (2014). Science centers. Which role can they play to participate in a city social reconstruction? Journal of Science Communication, 13(02).

Claudia Aguirre is director of education and contents at Parque Explora, Medellin, Colombia. She is also coordinator of the Andes Node of RedPOP, the Latin American and Caribbean Network for the Popularization of Science and Technology.