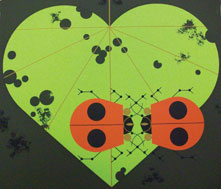 This is an extended version of an article that appeared in the March/April 2012 issue of Dimensions magazine.

Science center and museum professionals, artists, and educators from around the world share their projects, programs, exhibitions, and initiatives that combine science and art.

In our new Art of Science Gallery, the Academy of Natural Sciences of Drexel University creates four changing exhibitions each year showcasing rarely seen treasures from our own collections, works by contemporary artists, and imagery generated by Academy scientists, both past and present. Upcoming in 2012 are photographs of Academy collections by noted photographer Rosamond Purcell and photographs from VIREO, the Academy’s bird image collection.

Sisyphus is the name of a series of kinetic sculptures that I’ve been creating since 1997. A steel ball rolls through a field of sand, leaving highly detailed dune patterns in its wake. Below the sand field lies a robotic mechanism that moves a magnet precisely, under computer control. After each path is laboriously crafted, it is destroyed and the process begins anew. Sisyphus III was permanently installed at Technorama, Winterthur, Switzerland, in 2003, and continues its “toil” on the 10-foot (3-meter) diameter field to this day. I just returned from Wolfsburg, Germany, after installing a light-weight, traveling version for a nine-month stay at Phaeno.

Bijoux: The Origins and Impact of Jewelry, an exhibition developed by the Bruce Museum of Art and Science, explores the wide range of materials used to make jewelry, from bones and fossils to diamonds and moissanite. Visually enticing as well as intellectually stimulating, jewelry makes for a perfect vehicle to convey the relationship of our everyday lives with science, geography, history, and economics. Bijoux presents the complexities of jewelry making, from Earth’s processes to human ingenuity.

Many of the opportunities of the future will be found in the application of science, technology, engineering, and math (STEM), but without imagination and creativity, we will merely repeat the mistakes of the past. Ignition* is a flagship program of the nonprofit organization Ignite!, which promotes creativity in learning. Over three years, the program has worked with more than 23,000 young people to encourage their enthusiasm for STEM subjects through activities including an Invention competition and SciArt film premieres. Ignition* has worked with museums and science centers including the Natural History and Science Museums in London, and the Snibston Discovery Center in Leicestershire.

Art and science collide in a new free monthly lecture series at the Clay Center for the Arts & Sciences of West Virginia, featuring professors from a variety of art- and science-related fields. The series launched in January with a lecture by Stanford University’s Gail Wight about the influence of science on her artwork. Other topics include the physical manifestation of creativity in the brain and the influence of environmental journalism on visual arts. The series runs through July.

The Museum of Arts & Sciences (MOAS) annual Summer Learning Institute combines art, science, and history. Classes range in topics from marine biology and art history to physics and paleontology. One such class, Terrors of the Deep, brought to life carnivorous animals from prehistoric to modern times. The highlight was the made-to-scale, mixed media sculpture of Architeuthis, or giant squid. The chicken wire-framed cephalopod was completed with foam, thick gauge wires, and paper mache by the 10- to 12-year-old students.

Families explore scientific clues at the Children’s Museum of Indianapolis to discover how ancient Chinese artists painted the famous Terra Cotta Warriors. In one area of the museum’s National Geographic Treasures of the Earth exhibition, visitors use a magnifying lens to examine a (faux) shard from a Terra Cotta Warrior for traces of paint. Just like the real conservation team, families match the minerals to paint colors (such as matching malachite to green and cinnabar to red) and then virtually repaint a warrior based on their analysis.

Whitaker Center for Science and the Arts highlights arts, education, entertainment, and cultural enrichment. The center features live concerts, theater and dance performances, and Hollywood blockbusters on an IMAX screen, as well as three floors of interactive, hands-on science exhibits.

Artworks have been central to the visitor experience at Phaeno from the outset. The artist’s unique grasp of scientific ideas gives us instant understanding. We enjoy the sheer beauty of Ned Kahn’s Seismic Sand, revealing changing landscapes in a drum beat. We experience the narrowing Toposonic Tunnel, complemented by Phaeno’s unique architecture. As we leave the science center, The Ring, an impressive installation by sound artist Trimpin, creates harmonies above us.

ReGeneration will be a new art/science exhibition at the New York Hall of Science, open from October 2012 through January 2013. The exhibition will explore the themes of community and sustainability through the newly commissioned work of 15 international artists. Many of the works will be co-created with community members. For example, Biomodd by Belgian artist Angelo Vermeulen is an art project in which community members build computer systems with living ecosystems inside of them.

For a wide variety of reasons, getting to a museum is not easy for everyone in Monterrey, Mexico. Planetario Alfa offers children the museum experience in their own schools through Ciencia Móvil (Mobile Science), an educational program that recreates the museum’s activities and demonstrations. Children then participate in dynamic workshops in which they reinforce the information seen in the demonstrations while creating artistic projects related to physics, chemistry, and astronomy. The program promotes creativity, cooperation, and interaction among students, teachers, and museum facilitators.

Can you engage audiences with a science show with no words? Yes, if you are the Visualise team from science made simple. Visualise is a spectacle involving physical theater, live science demonstrations, projected images, clowning, and music. Using ordinary objects in extraordinary ways, the performance invites the audience to make their own observations and discoveries. Developed and performed by former staff from Techniquest in Cardiff, Wales, Visualise has been performed in 15 countries, including in many science centers and museums.

The Anatomy in the Gallery program at the International Museum of Surgical Science has showcased rotating exhibitions of medically inspired contemporary art since 1998. Quarterly pairs of exhibitions feature artwork in traditional and new media that focuses on issues of embodiment, perspectives on medical practice, and the visual culture of medicine. The museum’s historical artifacts and educational exhibits provide a rich context for the art exhibitions, while the artwork adds another layer of experience for visitors, encouraging reflection on the nature of medicine and the human condition.

At the turn of the 19th century, physicist Ernst Chladni found that when he took a violin bow to a thin piece of metal covered in sand, the granules arranged themselves in beautiful, geometric patterns according to places of stillness and vibration. Last year, Exploratorium Artist-in-Residence (AIR) Meara O’Reilly discovered that with carefully sung notes and a transducer driving a similar plate, she was able to explore those same resonances. When she handed a microphone to museum visitors, she found that even untrained singers can make exquisite patterns in the sand. O’Reilly is currently working with our exhibit developers to transform her experiments into our next AIR exhibit.

The Children’s Museum of New Hampshire (CMNH) has always offered a mix of art, science, culture, and history. Recently, we have focused on blending perspectives. This approach is captured in our new Science, Technology, Engineering, Arts, and Math (STEAM) Coordinator position, and in the creation of new maker spaces and other blended visitor experiences. For example, the Studio focuses on creative thinking and open-ended exploration; visitors use featured materials to create their own take-home projects and investigate the central motif—light, air, water, seeds, costumes, or color—using scientific tools and equipment. Thinkering Lab is an engineering and design studio that encourages visitors to ask questions, design and implement ways to test possible answers, and then evaluate their findings. Gallery 6 is a professional art gallery showcasing regional work.

This approach is about best practices for us. Looking at an issue from multiple points of view encourages more complexity and subtlety. We believe that being interdisciplinary helps visitors build more flexible understandings that are useful in their day-to-day lives. But, specifically as a museum, we want each visitor to experience success, whatever their learning style, skill set, interests, or age. Being interdisciplinary also makes it more possible for families to explore together, which research tells us is central to deepening informal learning outcomes.

As we were designing ArtScience Museum, which opened in Singapore in February 2011, we decided to look at the creative process. In both art and science, an idea begins with a spark and evolves from there. We looked at the inspiration of art-scientists like Leonardo da Vinci and Lu Ban, and found that they typically went back to nature. For example, da Vinci’s drawings of flying machines were inspired by his observations of bat wings. The museum’s three galleries—Curiosity, Inspiration, and Expression—invite visitors to explore these connections between art and science.

House of Music is a modern interactive sound museum located in the historic city center. Six floors are dedicated to the presentation of the fascinating world of music and sound. Music becomes audible and visible in real and virtual rooms. Visitors engage in interactive play with music, learn about the history of music, experience unexpected sounds, and encounter music from aesthetic, scientific, popular, and artistic perspectives.

Art2STEM—which approaches STEM through the vehicle of art and design—is changing middle school girls’ minds about careers in the sciences. After experiencing the program, many girls who previously had no interest in STEM careers choose to enroll in Nashville’s STEM academies in ninth grade. Adventure Science Center works with local nonprofits, businesses, universities, volunteer mentors, and the public school system to deliver project-based science and engineering activities followed by field excursions to local businesses and a week-long summer camp. The program has served more than 400 girls to date.

As part of its opening, the Durango Discovery Museum instituted StudioLab, an “art + science” collaborative program. Every year, from May to August, an artist-scientist team works on a project at the museum. The selected artist-scientist team receives a $500 honorarium at the end of the project. In year one, artist Miki Harder worked with Jonathan Wolfe, executive director of the Fractal Foundation, on an inquiry into fractals. This past summer, photographer Paul Pennington and partners engaged the public in a variety of optics and camera obscura projects.

About the image: Lady Bug Lovers by Charley Harper was exhibited in the Art of Science Gallery at the Academy of Natural Sciences of Drexel University, Philadelphia. Photo courtesy Virginia Living Museum