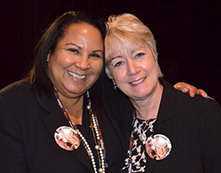 This interview appeared in the November/December 2015 issue of Dimensions magazine.

“Out with the old, in with the new” does not apply to Chevy Humphrey and Linda Conlon, ASTC’s outgoing and incoming board chairs, respectively. The two women have worked together closely since Humphrey, president and CEO of Arizona Science Center in Phoenix, took the helm two years ago. Among their shared objectives is a seamless leadership transition. Humphrey passed the torch to Conlon, chief executive at the International Centre for Life in Newcastle upon Tyne, England, United Kingdom, at the ASTC Annual Conference in Montreal in October. They chatted with Dimensions about their similar outlooks—and their few differences in opinion.