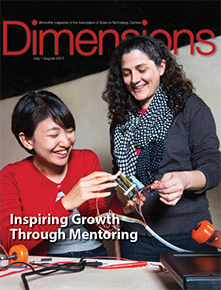 The science center and museum field tends to be very supportive and collaborative. There are many stories of individuals and institutions mentoring one another, passing along knowledge and resources, and helping the field as a whole to grow and move forward.

In this issue of Dimensions, we examine mentoring in our field on both the individual and institutional levels. Contributors share their perspectives on how mentoring has brought out the best in museum professionals and led to the creation of new science centers, programs, and exhibits, sometimes in communities or nations that didn’t previously have such resources. This issue also presents research on how we might improve the mentoring process to retain talented employees and encourage them to grow.