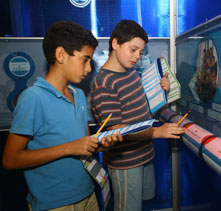 This is an extended discussion of the question that appeared in the Viewpoints department of the November/December 2011 issue of Dimensions magazine.

Yes, we should. Science and technology raise controversial topics, and as institutions that promote civil engagement, we should present these topics as part of our responsibility to society. (Pictured: Bloomfield’s Peace Labyrinth exhibition.)

I think that the question is not whether, but how; in particular, should science centers teach the science and let people make up their own minds, or should we advocate for action on a particular social or political point of view?

We have a role for sharing the genuine debates and disagreements between scientists on the interpretation of the data or evidence that they obtain. The route from information to knowledge-with-understanding can be a long and contentious one, and scientists would be the last to make claims of certainty when research evidence and methodologies are open to challenge or reinterpretation.

Certainly we should not go down the route of advocating (or even giving space to) some kind of “balanced” approach which has—to take an extreme example—a creationist exhibit on one page and an evolution one on the next. The Ecsite position statement (PDF, 57 KB) on this issue is worth noting.

Yes. I think science centers have a very important role in developing exhibits and other kinds of educational strategies on controversial topics. Science is a social practice, and as educational institutions, we have a strong responsibility in helping citizens understand the relationship between science and technology and social, ethical, and political issues. This will enable them to develop their own criteria to make personal decisions and also to participate in political scenarios, where science has a role that will affect their lives.

There are many reasons for museums to exhibit controversial themes: to attract visitors, to help educate them, to raise issues on the international and local agenda, and more.

MadaTech’s experience with the Body Worlds exhibition demonstrated that controversy creates media coverage and stimulates public discussion, putting the subject on the local agenda; increases visitor numbers; and draws new and varied audiences, of all ages and backgrounds, to the museum.

Moreover, preparations for the controversial exhibition forged new ties with diverse elements in the community, strengthened existing ones with local and national authorities, and stimulated new collaborations with senior members of the medical profession.

The after-effects of Body Worlds persist, as we build on the brand name created and heightened regard, by both community and decision makers.

Yes, we have a very strong role, I’d say a mission, to play in both developing and hosting exhibitions on “controversial” topics. One problem is that not all issues are controversial to everyone. There may be just be a lack of understanding of the science. For developers and museum directors, there may also be trepidation about responses to these exhibitions.

For example in the early 1990s, there was a consortium of museums formed to develop an exhibition on HIV/AIDS (What About AIDS?). We developed the exhibition and ASTC began to travel it with some concerns about how it would be received outside of New York City and Philadelphia, its inaugural sites. To our surprise and relief, there were no overt problems. Sure, probably some visitors with children avoided the area about sexual transmission of the virus, and others may have pointedly avoided the exhibition entirely, but on the whole there were no real issues. The “controversial” exhibition was well received and traveled in three copies. I know that we at the New York Hall of Science took our experience as a lesson that exhibitions on “controversial” issues are OK and necessary.

Museum visitors look to us as authorities for exhibitions and programs on real science, science behind the news, science behind the issues. How else with the decline in newspaper coverage of science and the sparse coverage on nightly news shows is the public going to get to understand issues in science that are challenging or challenged? And enjoy themselves while learning!

We can provide the means for understanding and appreciating the science behind issues like evolution, climate change, stem cell research, genetic control of plants and animals for foods, and understanding of human diseases and HIV/AIDS. I would encourage us to push, and push hard, on these and other “controversial” issues. I also argue that it is in our individual missions and ASTC’s mission to confront the attacks on the integrity of science by presenting the very science under attack. No comments about the naysayers necessary. As the old beef advert said, “Where’s the controversy?”

I like to think that science centers are like the cafés in the main squares of Spanish villages: places where citizens meet the mayor, the physician, or the pharmacist, and chat with them more frankly than in the city council, the hospital, or the pharmacy. In this sense, I am quite sure that science centers and museums are suitable places in which to speak about controversial scientific matters. In fact, one of our more successful programs consists of presenting to the public the science behind the news.

I think science centers and museums play an important role in helping our audiences understand controversy by understanding good science. As scientific research and knowledge continues to grow, our many publics need the skills and confidence to question the science in a way that leads to greater understanding.

During my early years in the museum profession and as a public school educator, I was a teacher of Human Sexuality and Growth and Development. I found that by being aware and respectful of different viewpoints, I was able to share current knowledge with a scientific base to both children and adults in a meaningful way. Exhibits can do the same thing; present accurate, scientific information; demonstrate the dynamic nature of scientific discovery; and provide the information and interactions in a respectful and meaningful way so that the museum visitor develops an informed opinion.

Yes, we have an important role. We are an essential part of cultural change. Controversial topics should be approached seriously so that the population will be able to make informed decisions. Explora developed an exhibition about HIV/AIDS a little more than 10 years ago, and it has been very successful.

Absolutely. We have such a unique opportunity to present such topics, and it is our responsibility to take advantage of that opportunity.

Of course! These topics give visitors a conversation piece and encourage discussion.