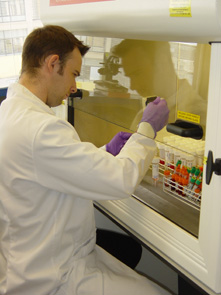 This is an extended discussion of the question that appeared in the Viewpoints department of the May/June 2012 issue of Dimensions magazine.

There are more ways in which a science center can be seen to be advocating a position than by just saying it outright. If you call yourself a science center, for example, your audience is likely to draw a conclusion as to where you stand in the evolution/creationism debate. The International Centre for Life leases space to a cutting-edge stem cell research lab, and however much we may hold debates on the ethics of stem cell research, by doing this we are clearly implicit supporters of the research

When we talk about the theory of evolution to our audiences, we are relaying an overwhelming scientific consensus that has resulted from some 200 years of observation, research, and the rigors of the scientific method. We come to the public with the science and, through our collections and exhibitions, show the evidence that supports our conclusions—the science behind the theory. By telling and showing the public how the world works, we describe and give evidence for evolution.

Today, informal science education (ISE) providers find themselves with an increasingly difficult challenge. For many of the compelling issues that society is facing today—particularly with regard to energy transitions—we don’t have the scientific research and therefore consensus needed to tell us how much of it “works.” As a result, our responsibility to the public is to say, “This is the Earth science behind the issue, but there are many things that we don’t yet understand or have the data for.” Much of the research that would shed light on the ramifications of the processes is yet to be done, so we can’t deliver all the scientific facts that might help the public make educated decisions. In fact, we wind up having to tell them that the situation is much more complicated than they imagine.

All the ways of procuring energy that we have in place right now are not sustainable. None are “good” in a carbon footprint sense. So, the second most difficult thing about education and outreach on energy transitions is the bottom line: We, as a species, have to reduce our energy consumption by, depending on which method of calculation one uses, 60–80%—or reduce our population by roughly the same—if we are to mediate climate change and reach a point where we might live sustainably. That is the issue, and it’s a tough fact to swallow for most.

This is not what the public wants to hear. They want to know, black or white, “Which energy source should we use? Which is best?” They want science to tell them what to do. As an industry, ISE providers need to keep in mind that science tells us how the world works; it does not tell us what society should do.

Truly, the most positive (and, we would argue, the most effective) action ISE providers can take is to be the facilitators within our communities—to educate the public on the science behind the issues, and foster civil discourse about these topics. Natural history museums (and science centers, nature centers, and other ISE providers) are the perfect venues to host these types of discussions with the public because (1) many venues have scientists on staff who are involved in doing the research that can shed light on the issues; (2) we have the collections to show empirical evidence; (3) we have venues across the nation—in rural, suburban, and urban settings—to host such conversations and offer educational programming; (4) we have staff that are particularly trained to communicate science to the public; and (5) we have the integrity amongst our public that we are the experts in the field on Earth science issues. These larger discussions also open the door to discussions of the nature of science, thereby increasing our visitors’ understanding of science as a process and, as a result, empowering them to more critically evaluate situations and make evidence-based conclusions and decisions.

Within communities of many opinions, ISE providers have the opportunity to be the rational place for the public to learn and consider the facts available, to promote civil discourse about the ramifications of the options based on the available data, and to be clear on what information is still needed. As ISE providers, we can—and do—facilitate an understanding of how the world works so the public can make informed decisions. Being a good facilitator is no easy job. However, as we venture into the 21st century and face the issues of climate change, biodiversity loss, and other challenges to our species, few others are as equally suited to carry out this much-needed outreach. And, if we don’t, who will?

Yes, science centers should advocate for reality- and fact-based approaches and positions on political and controversial issues. ASTC-affiliated institutions are expected by the public they serve not to cave in to ideology, political correctness, and wishful thinking. They should develop experiential-based education and awareness activities and exhibits that get at the scientific questions underlying political and controversial issues. They need to encourage questioning and to have staff/volunteers with the interests and resources to objectively address those questions.

Taking a position is appropriate when it is based on the preponderance of scientific evidence, and the issue is framed in sensitive ways that respond to and respect different perspectives. Effective advocacy acknowledges that information by itself does not change a person’s mind but may instead reinforce an existing point of view.

Scientific facts are often the missing component in political discussions on a whole range of topics from pollution to population growth. Museums and science centers should never shy away from presenting the facts out of “political” concerns. We serve the public, not the corporations or politicians we might obtain funding from.

Advocacy is a tough one. On one side, no one wants to be preached at when they’re digesting the evidence. Conversely, some issues seem so important and the evidence so clear that you’re a fool to hold your tongue. Generally, it’s best to err on the side of evidence and allow for human judgment to take its course.

As advocates of change to suboptimal status quos, it is incumbent on all science center and museum personnel to voice their stance on tough issues. Not doing so is anathema to our values as thoughtful, literate, and vibrant members of the Illuminati. Every voice enriches dialogue, cogent dissenters and debaters alike. In this light, every voice matters and every voice increases the conversation’s worth. To remain mum on controversial or sensitive political topics is irresponsible. Even more, it’s a hypocritical digression from the very nature of free thinking, creativity, and empiricism we so ardently engender our visitors and students to undertake and contemplate throughout their lives. Accordingly, we must speak up in support of, or disagreement with, issues of import.

I think the real question is whether we should do so deliberately rather than passively, or by default.