Family Farming: Feeding the World, Caring for the Earth 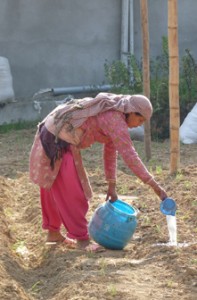 By Conchi Quintana
From Dimensions
March/April 2014

According to current forecasts, world agricultural production will have to increase by 70% by 2050 to meet the food demands of a world population of over 9 billion. The good news is that there is no need to invent anything new to respond to this challenge; instead, we need to realize the productive potential of family farming.

The International Year of Family Farming (IYFF-2014) is dedicated to recognizing the work of men and women family farmers worldwide. It acknowledges the potential of small farms to achieve food security and eradicate poverty through sustainable food production, as stated in Resolution 66/222, adopted by the UN General Assembly. Family farming also has great potential to protect land and the environment.

The making of an international year

FAO defines family farming as a “form of organizing crop and forest production as well as fishery, livestock raising, and aquaculture, which is managed and directed by a family, which mainly depends on family labor of both women and men. The family and the holding are linked, co-evolve, and combine economic, environmental, reproductive, social, and cultural functions.”

Family farming is found in all continents but overwhelmingly in developing nations. It fulfills a number of functions fundamental to the welfare of all humanity:

• Family farming feeds the world. Seventy percent of the world’s food products are produced by family farmers, whose activities are therefore crucial to combating hunger and malnutrition. In addition, small farms are often more productive than large industrial agricultural operations in terms of output per unit of land and energy use.

• Family farming generates well being. Forty percent of the world’s households depend on family farming for their livelihood. Of the 3 billion rural inhabitants in developing countries, 2.5 billion belong to families working in agriculture. It is important to note that women account for almost half of developing nations’ agricultural labor resources.

• Agriculture combats poverty. Gross domestic product (GDP) growth originating in agriculture reduces poverty twice as much as equivalent GDP growth in other sectors, according to the World Bank. Agricultural and rural growth also benefit the urban poor by creating more wealth and jobs while offering more and cheaper food.

• Family farming protects biodiversity and the environment. Family farming is a source of genetic diversity that uses seed varieties and livestock breeds well adapted to various environments. It also promotes the use of agroecological and traditional techniques, thus supporting the healthy functioning of ecosystems. Family farming is recognized as more resilient to the impacts of climate change due a wealth of knowledge on coping with natural disasters, amassed over many centuries. Moreover, it contributes to maintaining the population in rural areas and preserving historic cultural values. However, we must acknowledge that not all family farming methods are free from negative impacts, and we must continue to raise farmers’ awareness in this respect.

IYFF-2014 is not an end in itself. It is a key link in a process that aims to achieve the recognition of family farming and its potential to be the leading actor in its own development.

That said, the priority goal of IYFF-2014 is to promote within every nation truly active policies on behalf of the sustainable development of agricultural systems based on family units. Given the diversity of family farming systems and their different contexts, this goal comprises a series of concrete objectives:

• Recognize farmers and Indigenous organizations as the essential interlocutors of public authorities. This is crucial to ensure that agricultural policies take into account the real needs of these actors.

• Increase public investment in infrastructures and services in rural areas.

• Develop social awareness about the importance of family farming in order to strengthen links between urban and rural society. (Science centers and museums can play an important role in addressing this last objective in particular.)

Family farming must be a key factor in the UN’s Zero Hunger Challenge as well as in the current formation of the UN post-2015 Sustainable Development Goals.

Science centers and museums that serve audiences outside of rural areas have a particularly important educational role to play. It is crucial for people living in urban and suburban areas to understand and recognize the importance and functions of family farming so that they can join the call for measures to strengthen this form of agriculture. In this way we all can contribute to reducing the vulnerability of the food system in a world where, despite progress in production levels, nearly 900 million people suffer from hunger and malnutrition. Paradoxically, the majority of such people live in the rural areas of developing nations.

IYFF-2014 national committees around the world are leading activities related to public education, advocacy, and training. We invite science centers and museums to contact their national committees and get involved. To learn more, click here or contact WRF’s José Osaba.

In addition, science centers and museums may wish to participate in the World Meeting on Family Farming and Research, to be held in Montpellier, France, in June. The meeting is being organized by WRF and three organizations engaged in agricultural research: Agropolis Fondation, CGIAR, and CIRAD. To learn more, contact José Osaba. IYFF-2014 is also holding an international photo competition.

The celebration of IYFF-2014 offers 365 opportunities for each and every one of us to support the world’s family farmers in the interest of combating poverty, achieving food security, and attaining a vibrant rural society, based on respect for the environment and biodiversity.

Conchi Quintana is scientific coordinator at the World Rural Forum, based in Arkaute, Spain. For further information about the International Year of Family Farming, contact WRF’s José Osaba.

About the image: A farmer in Nepal waters crops. Photo courtesy the World Rural Forum.