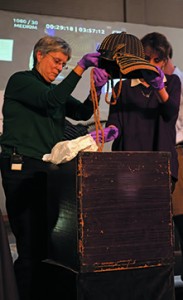 This is an extended discussion of the question that appeared in the Viewpoints department of the January/February 2016 issue of Dimensions magazine.

In November 2015, the Yale Peabody Museum of Natural History teamed up with the Barnum Museum in Bridgeport, Connecticut, for a very successful “outside-the-box” program that was actually an “inside-the-box” experience! In conjunction with our temporary exhibition Samurai and the Culture of Japan’s Great Peace, the Barnum Museum’s curator proposed that we publicly reveal the contents of a large, old Japanese box that came into their possession 12 years ago but had never been opened. We put together a panel of conservators and samurai-era experts and unpacked the box, accompanied by live narration and commentary, in front of a packed hall of over 300 eager and curious attendees. (Watch the video here.)

The contents? A beautiful suit of samurai armor from the 18th or early 19th century, which has since been evaluated by Japanese armor experts and deemed “preservation class.” While we were all pleased to find a suit of armor inside, the program gave us the chance to invite the public into the process of museum work—the occasional “re-discovery” or new interpretation of an object in our collections, the importance of good conservation practices, and the fact that closer inspection sometimes generates more questions than answers.

The Children’s Museum of Indianapolis is always looking for unique ways to create rich, new family traditions that also help drive attendance. We decided the best way to drive attendance in the Racing Capital of the World (Indianapolis) was to literally “drive” with Indy Racing Experience. We had a professional racecar driver deliver Santa Claus to the museum in a two-seat IndyCar in November 2012 on the day after Thanksgiving. Since 2013, Ed Carpenter, hometown racing hero and driver of the #20 car for CFH Racing, has done the honors. Attendance has grown each year for Santa’s Big Arrival, especially since we added Santa’s Secret Service (our specially dressed elves) repelling from the rooftop as the Jolly Old Elf zooms in.

Our other popular holiday event is using North America’s largest water clock to welcome the New Year with the entire family at a the hour of noon (instead of midnight) on New Year’s Eve. The event has become so popular that we had to add a 1:00 p.m. countdown to make room for all of our revelers.

Instead of worrying about periods of reduced traffic to your center, try looking at it as a chance to experiment with new ideas! In 2012, Science World British Columbia created a month-long science festival that spans September and October, to combat the traditionally slower fall season. Each year, the festival launches with a Community Science Celebration weekend. The weekend focuses on local organizations showcasing cool science happening right in the community. With the help of corporate sponsors, we have been able to offer free admission to at least one of the opening weekend days. We found this to be a great way not only to introduce the public to these organizations, but also to help strengthen and generate new relationships between these groups and Science World.

Feel like having a little fun, while generating interest? Publicity doesn’t have to be expensive. Check out our flash mob that helped promote our science festival. It cost nothing and was a blast!

The Carasso Science Park opened in July 2013 and since then we have tried a number of “outside-the-box” marketing ideas to interest new visitors in our content.

One of the first things that we did upon opening the museum was to send some of our museum guides to perform demonstrations at various schools around the city of Be’er Sheva. This was intended to initiate contact with schools as potential partners and also to interest schoolchildren in coming to visit with their families after school hours. The schoolchildren were given flyers with a coupon for a deal on entrance fees. This turned out to be a very successful method of focused marketing to a specific target audience, which in turn brought over 700 visitors to our museum with the flyers.

Another interesting marketing method was to send a “museum mascot,” essentially an actor dressed up as a very mad scientist, to some of the main areas for foot traffic in our city. The professor walked around engaging passersby and talking to them about coming to visit the museum for the Jewish holiday of Purim, for which we had several new events planned. This method successfully increased the number of local visitors for the holiday event, rather than visitors that travel from other cities (still our most common type of visitor).

We continue to think about new ways to attract visitors to our facility and we are learning that there are many effective ways to market our activities, aside from radio, newspaper, social media, or television advertising.

About the image: In front of a crowd, Catherine Sease (left), Yale Peabody Museum of Natural History senior conservator, and Adrienne Saint-Pierre, Barnum Museum curator, remove a samurai helmet from a mysterious box that the Barnum Museum had never opened. Photo by Mark Zurolo