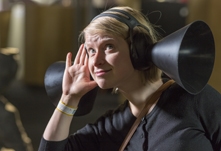 By Heidi Rosenström
From Dimensions
January/February 2015

Heureka, the Finnish Science Centre, in Vantaa, developed a traveling exhibition that aims to decrease the stigma connected to mental health problems and encourage visitors to take care of their mental health. Called Heureka Goes Crazy, this award-winning interactive exhibition was developed in cooperation with Pavilion of Knowledge–Ciência Viva in Lisbon, Portugal, and Universcience in Paris. The exhibition was open at Heureka from October 2013 to September 2014 and is now at Ciência Viva.

Mental health touches everyone. For example, more than 20% of Europeans receive professional help for mental health problems during their lifetime (Kovess-Masfety et al., 2007), and nearly 20% of U.S. adults have a mental illness (National Institute of Mental Health, 2014). Therefore, the topic is of huge societal importance. In a science center, mental health can be approached through many different areas of science and humanities, as well as through art, enabling a multidisciplinary approach. In addition, the science center environment allows us to try to simulate the experience of common mental disorders, as well as give a voice to people affected by mental illness.

“Nothing about us, without us”


We began the project by contacting the Finnish Central Association for Mental Health (FAMH), a national organization that promotes patients’ interests. FAMH became part of the exhibition’s scientific advisory board, along with leading Finnish psychiatrists. Together, they encouraged us to emphasize mental well-being.

Through FAMH, we gathered a group of 10 peer experts—people who had experienced mental health problems and received training in communicating their experiences. These peers were the true experts of the exhibition and were involved from stage one until the exhibition closed at Heureka. We met with the peers one-on-one, with the entire development team, and in an idea-generation session with staff.

It was important to the exhibition development team to open the planning process to both the peers and Heureka’s staff. Though most of our colleagues where enthusiastic about the topic, some had doubts and concerns, probably stemming from common prejudices and insecurities about the unknown. Involving our entire staff in the project allowed everybody the chance to become comfortable with the topic and with talking about it with visitors.

The peers and staff participated together in a session to generate exhibit ideas. One of the greatest benefits of this session was the staff and peers getting to know each other and developing a better understanding the subject. For this session, exhibition coordinator Jussi Kahlos and I divided participants into groups of one peer expert plus three to four staff members from different departments. We had the groups use classical brainstorming techniques, first to generate ideas and then to further develop some of the ideas.

Throughout, the development team discussed, presented, and tested ideas and prototypes with the peers, who made many helpful suggestions. For example, early in the project, we had envisioned simulating depression with a grey, windowless room, where the visitor could wear weighty boots or lie under a lead blanket to appreciate how hard it is to get up or go out when depressed. Some of our scientific experts favored this idea, too. But all the peers described depression as nothingness and not feeling anything. How would we simulate something that cannot be felt?

Instead, we constructed a setting where the visitor stands in a living room and hears the thoughts of a depressed man and his wife and child, portrayed with lifesize dolls. The visitor becomes immersed in somebody else’s reality. Since mental disorders affect the whole family, we were also able to display this dimension.

We focused the exhibition on three themes:

1. The Labeled discusses how mental disorders have been viewed and treated in the past and present, and the notion that what is considered “normal” depends greatly on society. For example, in Old Cures for Insanity, visitors can learn how depression and schizophrenia were treated by noted experts of their time, like Jean-Étienne Dominique Esquirol, Sigmund Freud, and Anton Ludwig Ernst Horn.

2. How Does It Feel tries to simulate what it can be like to suffer from mental disorders. In When Reality Distorts, visitors enter a room that looks like a barber shop and hear both the barber’s voice and other voices “inside” their head. They also see subtle visual cues, like blinking eyes on a hair model poster, which add to the feeling of paranoia.

3. Go Crazy! promotes mental wellbeing and encourages visitors to have fun through social engagement. For example, in Dance like Crazy, visitors can dance to music coming from loudspeakers inside big hats that hang from the ceiling. The loudspeakers direct sound so well that only someone below the hat hears the music, while people nearby see the person dance in silence.

We decided not to go too deep into the medical aspects of mental disorders, in part because the science is constantly changing, but mainly because science centers are not the places to give medical advice. We didn’t want people to look for diagnoses for themselves or their family members. As our Portuguese collaborators put it, “This is a social exhibition!” Our evaluation studies of the exhibition and a guest book both indicate that our strategy worked. People learned more about mental disorders and their effects, but the exhibition didn’t raise a lot of worries.

Designers Mikko Kauhanen and Touko Korhonen devised a concept that creates a unique atmosphere and gives space for visitors to reflect, talk, and explore. They started with the idea of a jewelry box and reasoned that, just like people, jewelry boxes look similar on the outside, but their insides and contents are unique. The boxes, or booth-like exhibit structures, were made of laminated veneer-lumber, and the insides are covered with paintings by Finnish artist Vappu Rossi. Rossi became engrossed in the topic while creating 20 paintings for the exhibition, and once it opened, she hosted guided tours focusing on her paintings.

Art is present in the exhibition in other ways, too. Portraits taken by Finnish photographer Karoliina Bärlund display people, some of whom have experienced mental health problems—but even the development team doesn’t know which ones because mental health doesn’t show on the outside.

Another piece is the Schizophone, by French artist Pierre-Laurent Cassière. This acoustic sculpture consists of a headset with two funnels, one for each ear. The Schizophone doesn’t try to simulate schizophrenia, but it gives a realistic feeling of the loss of attentiveness that accompanies many psychotic disorders. The funnels pick up sounds in an unusual way—Schizophone users can’t hear nearby sounds, but they hear clearly those from farther away. The feeling is one of unease when significant and insignificant information are mixed up and the brain can’t make sense of it.

We wanted to encourage dialogue, so many of the exhibits were developed as multiuser experiences, allowing visitors to tackle both the fears and joys of the exhibition together. In addition, visitors can meet the peer experts, sometimes in person and also at the exhibit My Life. Visitors sit at a round table and select a peer’s name. A life-size film of the peer appears on the screen at the other side of the table, and the peer talks openly and touchingly about his or her experiences with mental health problems and ways of coping. The My Life exhibit conveys a strong atmosphere of equity, trust, and respect, which is preserved throughout the exhibition.

A provocative name and marketing plan


When it came to naming the exhibition and developing a marketing campaign, the topic presented a challenge. We wanted to find a name that would awaken interest and state the content without being offensive. We developed the name Heureka Goes Crazy together with FAMH and the peers, who felt that, even with serious issues, humor is a good thing. They emphasized that Heureka itself was going crazy so we were not labeling anyone.

The consensus was to avoid a straightlaced, edifying, or condemning marketing campaign. On the other hand, we felt it shouldn’t be too “crazy,” either. We also wanted to avoid branding people who struggle with mental health issues, as well as avoid references to stereotypical madmen in movies or to the frightening experience of mental health problems. A natural outcome was to involve the whole staff of Heureka in the campaign, which portrayed more than 50 staff members wearing “crazy goggles” to show that we all see the world differently, depending on the glasses we wear.

Heureka Goes Crazy created many new and fruitful practices that will influence how we approach future projects. By developing an exhibition on a topic outside people’s comfort zone, Heureka intellectually challenged its own mission: “We share the joy of discovery.” Issues of mental health cannot be dealt with only through the concept of joy. Our experiences with Heureka Goes Crazy reassured us that, by covering a topic not easily discussed around the family dining table, we can stimulate public discussion. We can influence people’s attitudes, as well as attract new audiences.

As science centers, we should not restrict ourselves to easily approachable topics purely about natural sciences; we should develop exhibitions about issues that are hard to talk about and even painful. By addressing these topics bravely and displaying them sensitively in an optimistic and constructive way, we can broaden our own horizons and be more inclusive.

Heidi Rosenström is an exhibition producer at Heureka, the Finnish Science Centre, in Vantaa. Heureka Goes Crazy is currently at the Pavilion of Knowledge–Ciência Viva in Lisbon, Portugal (with the local name Loucamente). It will then travel to Universcience in Paris in November 2015, and it will be available for rent after it closes in Paris in August 2016.

About the image: The Schizophone by French artist Pierre-Laurent Cassière gives a feeling of the loss of attentiveness that accompanies many psychotic disorders. Photo courtesy Heureka