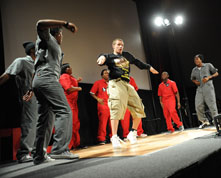 By Andy Aichele
From Dimensions
May/June 2012

Last November, hundreds of people attended two TEDx events at COSI in Columbus, Ohio. They listened to and engaged with speakers exploring topics ranging from modern urban violence to the future of architecture, from hospice care in South Africa to the habits of wasps in California. And with provocative titles like “Eat the Eyeball,” the topics were definitely engaging! The audiences were also treated to dynamic performances by dancers, poets, and a band offering up “musical gumbo.” They even experienced COSI’s own demonstration of exploding hydrogen balloons, synchronized to the cannon fire of Tchaikovsky’s 1812 Overture.

TEDx events are independently organized by communities, organizations, and individuals to stimulate dialogue at the local level. These events are licensed by TED, whose conferences highlight presenters from the worlds of Technology, Entertainment, and Design. TED talks feature “ideas worth spreading” and are widely watched around the world through online broadcasts.

TEDxColumbus was launched in 2009 with a half-day program hosted by the Wexner Center for the Arts at the Ohio State University. The event grew in 2010 and was hosted by the Columbus College of Art and Design. As the energy around TEDx increased, the conference needed a new, bigger venue in 2011. We at COSI were approached to be not only the venue, but also the host partner, collaborator, and fiscal agent. The third annual TEDxColumbus, celebrating “A Moment in Time,” was presented on November 11, 2011, with around 600 participants and 15 speakers and performers. In accordance with TEDx guidelines, each presentation was no longer than 18 minutes.

Ruth Milligan, TEDxColumbus curator, met with COSI education, development, strategy, finance, and facility rental teams early in 2011 to create a true partnership event. “COSI provided a dynamic environment and assisted in creating unique experiential programming that added great value to TEDxColumbus,” Milligan states. COSI served as the fiscal agent for the TEDxColumbus organization, so that sponsorship, funding, and underwriting from organizations such as the Columbus Foundation could “pass through” COSI’s finance department to support the event. By donating the space for the event, COSI was able to expand its reach to a new adult and corporate audience.

Kim Kiehl, COSI senior vice president and chief strategy and operations officer adds, “Partnering with events like TED helps the public see us as contributing to our community in a broader way—as a place that stimulates and hosts all types of intellectual conversations and interactions rather than those only associated with traditional science museum topics. In addition, it brings people to the museum who may not have thought of coming on their own.”

The ticket price for the attendees included parking, lunch, and some special COSI experiences, such as the demonstration of exploding hydrogen balloons (which, incidentally, took place at 11:11 a.m. on 11/11/11—a true “moment in time.”) Attendees also had the opportunity to explore COSI’s exhibits during two breaks.

Milligan and the TEDxColumbus team worked with local and regional vendors to bring in seating, staging, lighting, and sound to complement COSI’s systems. Because the true legacy of TED events is the ability to view talks online after the event, we also engaged COSI in-building partner WOSU Public Media, Columbus’s and Ohio State University’s Public Broadcasting Service affiliate, to record and webcast the video content.

Early in the planning process, Milligan approached COSI with an additional opportunity—the possibility of launching the inaugural TEDxYouth@Columbus. This event would mirror the structure of the TEDx event, targeted at a youth audience. COSI saw this as a unique opportunity to engage with teens and college-age students in central Ohio’s first-ever TEDxYouth event, while using the same stage, seating, video capabilities, and financial and staff support as TEDxColumbus. Milligan held the license for TEDxYouth@Columbus and tapped school designer and youth advocate Christian Long and me as the two co-curators for the youth event.

We began our planning late in May 2011 with the goal of producing a half-day event with speakers and performers, followed by an intensive two-hour mentoring session with local adults who could guide the youth participants, or “change agents” as we dubbed them, in developing and pursuing their own “idea worth spreading.” We formed a committee with adult mentors and youth participants (including members of COSI’s Teen Advisory Council and Volunteer Program) to plan, market, and deliver the event. Change agents were middle school or high school students who applied via the TEDxColumbus website with an idea of how they wanted to change their school, neighborhood, community, or the world, ranging from planning neighborhood crime prevention events to raising awareness around social issues like child abuse.

Speakers and performers also applied via the website and were then invited to audition. Speakers were coached on constructing and delivering their talks, which focused on an idea that originated when each speaker was between 14 and 25 years old. Most presenters were high school age and included performers from programs at a local community center. Speakers also included two COSI team members: Shashank Sirivolu (Teen Advisory Council member) and Justin Boggs (part-time floor faculty member).

The inaugural event on November 10, 2011—the day before TEDxColumbus— was a resounding success with around 100 change agents, 20 adult mentors, and 24 speakers and performers. Long is following up with the change agents through 2012 to track progress on their ideas. Videos, bios, and event descriptions for both TEDx events are available here.

Anyone or any organization can apply for a TEDx license. Events can be big or small, covering a single classroom or an entire metropolitan area. The TED website provides guidance on how to build an event. An important step is to determine the scope and select partners in the community who will help your TED event meet your goals.

With the success of these events, and the feeling that TEDxColumbus and TEDxYouth@Columbus have found a new home, the dates for 2012 have already been set. COSI will again serve as host partner with the youth event on October 3 and the adult event on October 5. Milligan has transferred the license for TEDxYouth@Columbus to me so that COSI can be even more deeply engaged. COSI will again serve as fiscal agent for the events. The events will be part of a week of events at COSI focused on the City of Columbus’s bicentennial celebrations, and are one week before the 2012 ASTC Annual Conference comes to Columbus on October 13–16!

Andy Aichele is director of COSI University at COSI, Columbus, Ohio, and co-curator of TEDxYouth@Columbus.