Into the Light: Bringing Science Education to the Incarcerated

By Nalini Nadkarni
From Dimensions
September/October 2014 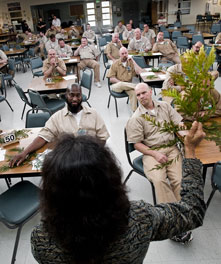 Science belongs everywhere. Although informal science learning typically takes place in the bright spots of society—our museums, botanical gardens, and science centers—some science educators are creating programs for individuals who live in the darker parts of our communities, such as prisons. Over 2 million people are in prison in the United States, with a national recidivism level of over 70%. Yet men and women who are incarcerated can also participate in science learning and contribute to conservation projects.

The Sustainability in Prisons Project (SPP) brings science and nature to inmates in prisons and jails by forging partnerships among academics, corrections staff, and conservationists. Dan Pacholke and I co-founded the SPP at the Evergreen State College in Olympia, Washington, in 2005. Partially supported by the National Science Foundation, the SPP has now expanded to more than 20 prisons and jails in seven states. SPP activities, which vary from one correctional facility to another, include science lectures, efforts to raise endangered species, and sustainability projects within the facilities, such as gardening or recycling.

In Washington State, where the SPP was founded, the program now reaches all 12 of the state’s prisons, in collaboration with the Washington State Department of Corrections. Each month, between 15 and 50 inmates attend lectures by scientists at Washington State correctional facilities. The presentations are reviewed by SPP staff to meet appropriate learning levels. In addition, the SPP enables incarcerated men and women to work with conservation groups to rear endangered species such as the Oregon spotted frog and Taylor’s checkerspot butterfly for release and rare prairie plants for habitat restoration projects.

Program impacts
Inmates who work on conservation projects pay diligent attention to the living things for which they have been given responsibility. The seedling, frog, or butterfly pupa an inmate cares for seems to provide a link to and an opportunity to contribute to the outside world, promoting a positive self-image, as indicated by anecdotal evidence. Prison officials have noted that participating inmates also have more positive social interactions with each other.

The program benefits science, as well. Inmates have gathered valuable data to establish or improve protocols on growing or rearing endangered species. In turn, these plants and animals have contributed significantly to restoration and conservation projects in the region.

Many scientists who present talks worry that inmates may not relate to, understand, or appreciate their presentations. But the SPP’s quantitative surveys of inmates who attend lectures show that they do learn scientific content. In a broad sense, the SPP asks informal science educators to ask questions about ourselves, including, “What are the conceptions and misconceptions we hold of people who cannot visit our institutions?”

Bringing light into darkness
SPP staff has found that inmates deeply engage in scientific subjects through the program and often find parallels and metaphors that relate to their daily experiences in prison. For example, in one project, inmates helped me learn how to grow mosses for the horticulture trade, to alleviate wild-collecting of moss from old-growth forests. I taught the men that mosses are very resilient—they can dry down and stop photosynthesizing until they are rehydrated, even after years of no water. One of the inmates asked if he could take a sprig of moss to his cell, where he kept it in his drawer. Later, he said, “I check it every day, and even though it lies in the dark, it is still alive. Like me.”

The SPP elucidates the power of science and science education, as it reveals that even those individuals who live in what seem to be the darkest parts of our community are able to create light when presented with science education opportunities.

Nalini Nadkarni is co-founder and former co-director of the Sustainability in Prisons Project. She is currently director of the University of Utah’s Center for Science and Mathematics Education in Salt Lake City, which houses INSPIRE: Initiative to Bring Science Programs to the Incarcerated, a program based on the SPP. Nadkarni is also a professor of biology whose research centers around forest canopy ecology. Science centers and museums that would like to get involved in the SPP Network may contact the author for more information.

About the image: The author gives a lecture about trees to inmates at Stafford Creek Corrections Center, Aberdeen, Washington, as part of a monthly science lecture series through the Sustainability in Prisons Project. Photo by Benj Drummond and Sarah Joy Steele

About the image: The author gives a lecture

about trees to inmates at Stafford Creek

as part of a monthly science lecture series

through the Sustainability in Prisons

Project. Photo by Benj Drummond and