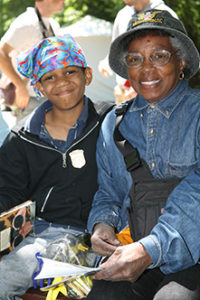 By Tim Watkins
From Dimensions
May/June 2016

On a May morning in 2007, fourth grader Joshua White hopped on a city bus with his grandmother and rode across Washington, D.C., for his first visit to the nature center at Rock Creek Park. He came to participate in the first annual national park BioBlitz organized by the U.S. National Park Service (NPS) and National Geographic.

At the park, he met a passel of like-minded kids and adults, along with dozens of scientists from the Smithsonian Institution, universities, and other organizations. Gripping a net, Joshua swept up what he thought was an interesting leaf drifting through a meadow. He soon discovered with delight that he had captured a tiger swallowtail butterfly. He held the butterfly for a few moments to observe its structure and behavior and learned about swallowtail ecology from a Smithsonian entomologist by his side. Then Joshua sketched the butterfly in his field notebook before letting it go in the breeze and heading off in pursuit of more drifting leaves.

As his grandmother reported to a National Geographic blogger, “We read about the BioBlitz in the newspaper, and I knew that Joshua would like it. He likes everything that’s outside. He’s at home out here.”

In 2016, the NPS celebrates its centennial, and our goal is to connect with and create the next generation of park visitors, supporters, and advocates. Engaging people in learning about and participating in science is a powerful way of meeting that goal. We have a century of leadership in place-based learning about North America’s history, environment, and cultures. We are building on that experience to emphasize learning science with the conviction that the emotional and intellectual value of national parks can help improve public science literacy. To act on that conviction, we are fostering stronger collaborations between our own science and interpretation divisions, as well as partnerships with other science and education organizations. Many of our place-based science learning activities involve, or could involve, science centers.

The NPS has 18 Research Learning Centers (RLCs), which promote and facilitate scientific research in parks and communicate the processes and results of that research to park managers and the public. To achieve their science communication goals, RLCs partner with a wide array of education organizations. Multiple RLCs are involved in most of the following examples and are good points of contact for working with national parks on science, technology, engineering, and math (STEM) education. Start your search for a specific RLC here.

Dozens of national parks have hosted BioBlitzes since 1996, and several are held every year. In each case, citizen scientists join professional scientists to find, count, observe, and learn about as many species as possible in a 24-hour period. The data they collect (on paper, via apps like iNaturalist, or with photographs) go into public databases that scientists and teachers can use to study biodiversity. They are also added to official species lists used to make park management decisions. The observations often reveal species that nobody knew existed in the park, and sometimes even new species. For example, during a 2010 BioBlitz at Biscayne National Park in Florida, a new species of tardigrade or water bear was discovered and named Archechiniscus biscaynei.

The educational opportunities at a BioBlitz tend to focus on taxonomy, biodiversity, research methods, and general natural history. With anywhere from dozens to nearly 10,000 participants, BioBlitzes present a wide range of opportunities for science outreach and education in the field or through exhibit booths.

By the end of 2016, 120 parks around the country will hold a total of 135 BioBlitzes to highlight the full range of habitats and biodiversity protected by the NPS, from the Arctic to the tropics. During the peak week of May 16 to 22, many thousands of people participated in a total of 74 BioBlitzes, documenting many thousands of species. The number of confirmed species will rise steadily as identifications (particularly of insects, which can require microscopic examination by specialists) are completed.

Parks host many other citizen science projects around the country. Examples include tracking plant phenology (the timing of life cycle events) in several California parks (California Phenology Project) and along the Appalachian Trail in the eastern United States (AT Seasons). Both of those projects are done in partnership with the USA National Phenology Network and local organizations. High school students monitor behavioral responses of nesting sea turtles to light pollution at Gulf Islands National Seashore in Florida. And citizen science volunteers are collecting dragonfly larvae in dozens of parks nationwide so the larvae can be analyzed for mercury content.

In all these cases, the data help park resource managers learn more about species and the condition of protected natural resources in order to make science-based stewardship decisions. Science centers have not been involved in these projects, but parks are interested in partnering to host workshops or training sessions for citizen science volunteers.

At Indiana Dunes National Lakeshore in Chesterton, staff from the RLC and the park’s Interpretation Division offer about a half-dozen teacher development workshops each year on science topics, such as endangered butterfly habitat quality and deer impacts to plant communities. The workshops occasionally involve presentations by scientists and educators from other organizations like the Field Museum.

At Great Smoky Mountains National Park, which straddles the North Carolina–Tennessee border, RLC staff conducts teacher workshops in collaboration with the North Carolina Museum of Natural Sciences in Raleigh. The workshops are part of the museum’s weekend Educator Trek professional development series and focus on teaching about air quality and climate change issues.

NPS director Jonathan Jarvis recently said about national parks, “We have a responsibility with these places to help the public understand complex issues.” Given the importance of science for understanding such issues, the unique ability of national parks to motivate and inspire STEM learning is a clear guide for the NPS and our partners in the next 100 years.

About the image: Joshua White, age 10, and his grandmother, Joyce Jayson, participated in the first annual national park BioBlitz organized by the U.S. National Park Service and National Geographic, held in 2007 in Rock Creek Park in Washington, D.C. Photo by Mark Christmas/National Geographic