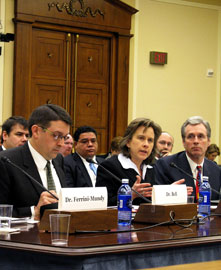 By Sean Smith
From Dimensions
September/October 2013

For many years, ASTC has attempted to “make the case” to local, state, and national government officials for funding competitive grant programs that can benefit science centers, museums, and their communities. While some of our traditional talking points about engaging audiences with science, technology, engineering, math (STEM), health, and environmental issues remain influential, these messages, like the field itself, have evolved in recent years. Government officials’ perception of the field, too, is evolving.

Recently, ASTC and its Public Policy Committee (which is charged with helping to set, approve, and implement our advocacy agenda) have found that U.S. legislators and congressional staffers are becoming increasingly interested in—and supportive of—some of the field’s important but lesser known capabilities. Among these, teacher professional development (offered by 82% of ASTC’s U.S. members) and curriculum materials (offered by 75% of U.S. members) have been especially well received in light of the pressing need for improved STEM education.

ASTC and its Public Policy Committee highlight these contributions whenever possible, and we are beginning to see the results. In one example, we have laid the groundwork for science centers and museums to compete more directly for U.S. federal teacher professional development funding under a reauthorized Elementary and Secondary Education Act (also known as No Child Left Behind). While the prospects for the passage of a new law during the current session of the U.S. Congress appear tenuous at press time, we believe our outreach has led to a deeper appreciation among elected officials for the field’s contributions to local communities.

In an effort to illustrate how U.S. governors can meet their STEM goals by engaging with school districts, teachers, and science centers and museums, ASTC provided input to the (U.S.) National Governors Association (NGA) for their Governors Guide to STEM Education. A related NGA issue brief, The Role of Informal Science in the State Education Agenda, can be downloaded here.

ASTC strives to support our members’ efforts to engage their government officials. Click here for background information, talking points, and U.S. federal budget overviews and analysis, and let us know what other resources would be helpful to you.

When you approach your elected officials, keep the following points in mind:

Sean Smith is ASTC’s director of government and public relations.

About the image: Andrea Ingram (center), vice president of education and guest services at Chicago’s Museum of Science and Industry, testifies before the U.S. House of Representatives Committee on Science and Technology, Subcommittee on Research and Science Education, on the role science museums play in STEM education. Photo by Kevin Frank/MSI