Museum Schools: Up to the Standards 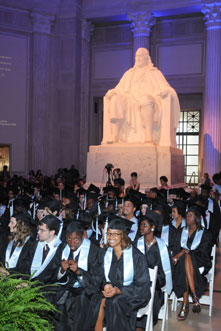 A few days before the 2011 Super Bowl became the most watched television program in U.S. history, President Barack Obama delivered his own live broadcast. His State of the Union address touched on the big game, but in relation to a very different goal. “We need to teach our kids that it’s not just the winner of the Super Bowl who deserves to be celebrated, but the winner of the science fair,” he stated.

Among the objectives outlined that evening is to train 100,000 teachers in science, technology, engineering, and math (STEM) fields. But in U.S. public schools, teachers’ priorities (and curricula) are largely driven by the need for students to score well on standardized, math- and literacy-oriented tests, in order to avoid government-mandated consequences. In an age when both national and individual success increasingly depend on STEM skills that go far beyond basic math, how can teachers prepare themselves to prepare students for the future?

Enter the science museum. Science centers and museums have always provided schools with resources. But some institutions are extending these relationships into full-fledged partnerships, working through schools housed at the museums, magnet schools in their surrounding communities, or other long-term collaborations. Whether designing new curricula or working with what’s in place, these museums assign themselves greater responsibility than simply supplementing lesson plans. They are partnering with schools to expand their own educational role, and to encourage teachers to view museums as more than a one-time field trip destination.

“What we’re trying to do here is more than going to the school, doing an assembly, and going away. While those programs are great and we still do those, we feel the better model is a relationship where we can start to integrate formal and informal styles,” says Ron Rohovit, deputy director of education at the California Science Center, which partnered with the Los Angeles Unified School District to open the Alexander Science Center School, a K–5 public neighborhood charter school, on its campus in 2004.

Museum schools come in an array of sizes and structures. Similar to the California Science Center’s partnership, the Franklin Institute, Philadelphia, and the School District of Philadelphia formed and manage the Science Leadership Academy, a public high school located a few blocks from the museum. The Fort Worth Museum of Science and History, Texas, houses the Museum School for ages 3 to 6, founded in 1949. The Creative Discovery Museum (CDM) is one of seven museum partners of the public, K–8 Normal Park Museum Magnet School in Chattanooga, Tennessee. The School in the Park (SITP) program coordinates and provides support to two public San Diego elementary schools to bring students into 10 museums and cultural institutions in Balboa Park—including the San Diego Natural History Museum (SDNHM) and the Reuben H. Fleet Science Center—for a series of one- to three-week programs.

These collaborations are proving mutually beneficial, and they’re changing the way science education is handled in both museum and school environments. “It’s a two-way street” for teachers and museum educators, says the California Science Center’s Rohovit. “Through this partnership, this exchange of information, we learn about each other’s worlds and how we can blend them together.”

This philosophy breeds what he calls “science center–style learning,” a system of fluid movement between formal and informal experiences. At the Alexander Science Center School, science center educators come to the classroom to model hands-on activities related to school curricula, curators work with teachers to provide scientific background, and students visit the center to explore exhibitions that tie in to their assignments.

“When [students] leave the science center, they have had an immersive hands–on experience, which provides them with more meaning when they go back to classroom to do more formal activities. One just very much enforces and enhances the other,” Rohovit explains.

In addition, the center has come to rely on input from the school. While developing an off-site program on desert ecology for grades K–2, the center prototyped the activities at the school and collected feedback from both teachers and students.

Schools also acknowledge this symbiotic relationship. “One of our secrets to success is that we don’t view this partnership as one-way,” says Chris Lehmann, founding principal of Philadelphia’s Science Leadership Academy. The school and museum have a “shared commitment to open learning, and to the idea that both partners have an incredible amount to give to the other.”

Inquiry in a standards-based world

Throughout the museum schools, emphasis is placed on inquiry. At the Science Leadership Academy, where laptops trump textbooks, students are urged to think for themselves. “The fundamental thread that ties together all of the coursework, whether it’s biochemistry or the intersection of history and literature, is asking a lot of questions and then doing research to find your answers,” says Frederic Bertley, vice president of science and innovation at the Franklin.

Yet terms that are commonplace for museum educators—inquiry, integration, immersion—don’t have much use in the world of standardized testing. Most U.S. schoolteachers exist in this world, and have had to adapt their techniques and priorities accordingly. An informal learning component therefore is not always a welcome addition.

Museums creating schools from scratch seek teachers who are open to new methodologies. The Franklin selected Lehmann as founding principal and worked with him to pick the Science Leadership Academy’s first cohort of teachers in 2006. “We looked for teachers without boundaries, who understand that going through a textbook is an antiquated method,” says Bertley.

But often museums partner with schools that have a staff in place. During students’ time in Balboa Park, museum educators lead instruction in the morning, classroom teachers take over in the afternoon, and SITP facilitators support the classes throughout the day. While the SITP web site describes the afternoon as a time for teachers to “bridge and integrate morning content with school curriculum,” other priorities may weigh out. At that point, teachers are “pretty much feeling the need to open the textbook,” admits Linda Feldman, SITP’s director.

The same is true at the Alexander Science Center School, which is evaluated like any other public school—i.e., by test scores. Kindergarten teacher Jane Fung says individual teachers decide to what extent they can incorporate the center’s resources and still meet district mandates. Because of the pressures associated with testing, “I don’t think every teacher at the school utilizes the science center as much as they could,” she says.

But museum program priorities and state standards do not have to be mutually exclusive. Lehmann explains that it’s not a matter of switching between inquiry-based learning and preparing students for tests; both are accomplished at once. “I don’t see that as balancing; I see that as the same. State standards apply to what we do,” he says.

Similarly, SITP asks its partner museums to address state standards in their activities, which may include making movies, creating augmented-reality games, or learning Shakespeare. “Rather than focusing on passing multiple-choice tests, the focus is how to teach the whole child,” Feldman says.

Museums have a variety of methods to help teachers balance the informal and formal spheres. It is essential for teachers to have a reliable contact at the museum, says Lynne Mulligan, senior programs manager at Chattanooga’s CDM. Before each of Normal Park’s quarterly units, she and representatives of its other museum partners visit the school to work with teachers. “We look at the curriculum and discuss how we can best assist them with what they’re teaching,” Mulligan says.

The Fort Worth Museum of Science and History’s Museum School hires teachers with expertise in early childhood—but few have prior museum experience, says Kit Goolsby, the museum’s vice president of education. As the curriculum is supported by the teaching collections, teachers must become familiar with the museum’s holdings. A “very open-door policy between the teaching staff and the curatorial staff” facilitates this, Goolsby reports, as does pairing newcomers with more experienced teachers.

Professional development is, of course, essential. All new teachers at the Science Leadership Academy benefit from PD by both school and museum staff, says Bertley of the Franklin. At the California Science Center, there is an educational staff person assigned to each grade level at the Alexander Science Center School who regularly updates teachers on museum resources and helps plan field trips. When teachers need to develop more specific, scientific skills, they can request to have one of the science center’s experts come to the classroom. As kindergarten teacher Fung explains, “We’re general subject teachers, so to have an actual scientist who did his dissertation on kelp forests come into the classroom and model a lesson for you is an amazing experience to grow in professionally.”

To Lehmann of the Science Leadership Academy, the greatest perk of partnering with a museum is gaining the support of an institution as dedicated to both teachers and students as the school itself. “It gives you incredible stability in what have been very unstable educational times,” he says. “Knowing that we have the Franklin and that they remain deeply committed to the partnership and the success of the school tempers that. It anchors us in a pedagogical framework that transcends whatever the political wind is of the moment.”

Joelle Seligson is a freelance writer and associate editor at the Freer and Sackler Galleries, the Smithsonian’s Museums of Asian Art, Washington, D.C.