By Lily Whiteman and Sarah Bates
From Dimensions
January/February 2015 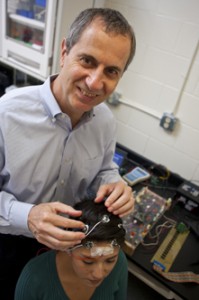 Your brain is what makes you . . .  you: It defines your personality and intellect and controls your physical movements. Your brain—a nonstop multitasking marvel—also regulates your involuntary responses, such as your breathing and heart function.

But despite its importance, no one knows exactly how the brain works. Why is this vital organ still an unknown frontier? Largely because it is the most complicated structure on Earth. Understanding how the brain generates thoughts, movements, and physiological responses in any organism —whether it be a worm or a human—remains a great scientific challenge.

Although the brain is still a long way from being understood, the field of neuroscience has significantly advanced in recent decades. Neuroscientists—many of whom have received funding from the (U.S.) National Science Foundation (NSF)—have uncovered the roles played by many parts of the brain and have developed game-changing technologies for visualizing and analyzing individual parts of the brain in ever finer detail.

Building on these discoveries, U.S. President Barack Obama in April 2013 launched the Brain Research Through Advancing Innovative Neurotechnologies (BRAIN) Initiative, which is aimed at revolutionizing our understanding of the brain by accelerating research and technology efforts across many disciplines inside and outside the government.

The BRAIN Initiative was kicked off with a total of $100 million in initial commitments from NSF, the (U.S.) National Institutes of Health, the Defense Advanced Research Projects Agency, and a number of private research institutes. Since its launch, the initiative has expanded to include the participation of several other federal agencies, scientific societies, and nonprofit organizations.

Because isolated discoveries in single fields won’t help us create an integrated picture of how all the parts of the brain work together, multidisciplinary brain research is essential to the BRAIN Initiative. NSF is unique among federal agencies in funding fundamental research across a broad range of science and engineering disciplines, including biology, chemistry, physics, mathematics, the social and behavioral sciences, and computer science.

So from the beginning, NSF has promoted multidisciplinary research as the cornerstone of its participation in the BRAIN Initiative. For example, NSF is sponsoring many workshops across neuroscience-related disciplines to identify priority research areas and last year established a $25 million integrative Center for Brains, Minds, and Machines at the Massachusetts Institute of Technology.

Most recently, NSF awarded 36 Early Concept Grants for Exploratory Research to enable the development of new technologies designed to improve our understanding of how complex behaviors emerge from the activity of brain circuits. A majority of these projects are collaborative and multidisciplinary in nature.

In addition to advancing research, NSF’s BRAIN Initiative activities are enhancing workforce education and helping to create new career opportunities. Science centers and museums may support such efforts by offering informal learning experiences about the brain that may inspire young people to pursue careers in neuroscience.

Working together, we can look forward to a new era in our understanding of the brain . . . and ourselves!