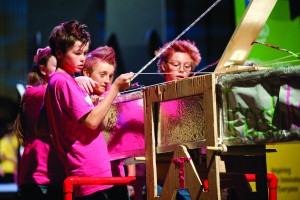 By Tim Ritchie
From Dimensions
September/October 2012

Everyone agrees that it will require an enormous commitment to innovation for humankind to survive (and thrive!) on our fragile planet. But to what must our communities, and our nations, commit in order to foster world-changing innovation? What roles can science centers play in nurturing innovators and encouraging innovation?

We think about these questions a great deal at the Tech Museum of Innovation in San Jose, California. We are located in the heart of Silicon Valley, so if anyone should be able to describe what it takes to nurture innovation, we should.

One of the Tech’s Board members challenged his associates at Bain & Company (a management consulting firm) to identify why innovation flourishes in Silicon Valley. The unpublished Bain report describes the habits and mindset of successful innovators and the ecosystem that nurtures innovation. This article focuses on the innovator’s mindset, because every science center can do a number of things to develop that mindset. I also briefly describe the ecosystem that innovators need in order to succeed. In some cases, science centers can play a role in nurturing that environment as well.

The mindset of successful innovators

1. They spot opportunities and follow their passion. For example, K.R. Sridhar, the founder of Bloom Energy, worked for NASA to develop a technology to convert electricity into oxygen. He believed that he could reverse this process and convert oxygen into electricity, thus providing to the world an abundant source of sustainable energy. Sridhar left NASA in 2001. Nine years later, the Bloom Energy Box went on the market.

2. They take risks and persist through failure. Successful innovators experience setbacks, learn from each one, improve, and, with sufficient grit and wisdom, ultimately succeed. The failures of Steve Jobs are legendary. He and Apple spent $50 million in four years developing the Lisa computer. Lisa’s high price led to low sales. Lisa was abandoned, but Apple itself persisted, learned valuable lessons, and switched its focus to the more affordable Macintosh, which was introduced in 1984.

3. They question conventional wisdom. Successful innovators understand that they will be surrounded by people who say their ideas won’t work. For example, Samuel Ginn, who founded AirTouch Communications, saw, long before others, that the future for communications rested with wireless technology. He left his position as CEO of PacTel in 1984, founded AirTouch, and took his company to the stock market in 1993 with an initial public offering of $1.57 billion.

4. They build teams to compensate for their weaknesses. Successful enterprises require many different skills: technical, financial, leadership, sales, and so on. Successful innovators do what they do best and find others to do the rest. In 2008, Leila Janah founded Samasource, a nonprofit organization that invented “microwork” to enable people with no previous computer experience to make a living using a computer. Leila had studied economic development in Africa, but she knew little about technology, so she hired a vice president of engineering and a COO and developed a company that now provides over 2,000 jobs in Kenya, India, Pakistan, Haiti, Uganda, and South Africa.

5. They encourage the right behaviors in their organizations. Successful innovators identify what makes their enterprises successful and reward it. For example, Google succeeds because it innovates faster than its competition. Google encourages innovation in as many ways as it can: Its engineers are allowed to dedicate 20% of their time to innovative projects, it holds regular “tech talks,” and it runs a “Google University.” As Business Week noted, “one of the key reasons for Google’s success is a belief that good ideas can, and should, come from anywhere.”

What can science centers do to nurture the innovator’s mindset?

No matter where a science center is located, it can offer programs and create exhibit experiences that encourage the development of an innovator’s mindset.

Host science competitions. For 25 years, the Tech has held the Tech Challenge in which students from third grade through high school work in groups to design a solution to an engineering challenge (such as rescuing a person who has fallen from a bridge after an earthquake), build a prototype, and demonstrate their device in front of thousands of spectators. The competition gives students opportunities to follow their passions, take risks, work hard and persist through failure, think beyond conventional solutions, build teams, and establish an effective culture. In so doing, they learn a bit about what it takes to become successful innovators.

Offer design-challenge education programs. Design-challenge learning takes hands-on learning to another level by asking people not only to learn by doing, but also to apply their creativity to open-ended engineering challenges. The Tech runs a series of lab programs, most of which are design challenges, in which students work together to solve engineering problems. They then present their solutions to the entire group. The final presentation shows that there are many ways to solve a problem and many paths to an answer.

At the Tech, we are committed to creating exhibit experiences that will nurture the innovator’s mindset. Over the next five years, we hope to develop 30,000 square feet (2,800 square meters) of exhibit space to create design-challenge exhibit platforms. These platforms enable us to partner with Silicon Valley–based businesses to showcase how technology solves problems. We will work with the businesses to use their products to create these open-ended exhibit experiences.

One of our first partners in creating a design-challenge exhibit experience is a local robotics company, Willow Garage. Willow Garage has developed an advanced robot called “PR2,” which visits the Tech on weekends. We surround PR2 with eight programming stations and challenge visitors to make the robot do something amazing. Visitors learn simple code and then program the robot. They run their programs (in front of everyone) and see if PR2 acts as they had envisioned. The exhibit pushes visitors to use their imaginations, take some risks, work with others, and apply technology to solve a problem.

We have also developed a strong relationship with the Maker Faire community. This past summer, we showcased 25 exhibits from the May 2012 Maker Faire Exposition that took place in San Mateo, California. These open-ended exhibits encouraged collaboration and offered visitors the opportunity to solve problems in a variety of ways. Chances are that the “maker community” near your center would love to partner with you, as well. (For more about the Maker Movement, see the July/August 2012 issue of Dimensions.)

The ecosystem that nurtures innovation

Innovators cannot succeed if the communities where they work don’t support innovation. The Bain report describes five factors that make up an “innovation ecosystem”:

1. A robust research community. Silicon Valley is full of strong universities and research institutions. They are the life-blood of every community that is rich in innovation.

2. A network of innovative companies. These companies are often the products of the research community. They, in turn, play their own role in providing start-up businesses with technology, talent, and resources.

4. Laws that encourage innovation. An example from California is that noncompete clauses are rarely enforced. That is, someone who leaves a company can work for its competitor right away.

What can science centers do to nurture the innovation ecosystem?

Gather and support the innovation community

Develop relationships with the people who are innovation’s gatekeepers: investors, entrepreneurs, university faculty, and lawyers who work with young companies. Get them involved with your center and with each other. Find where there are gaps in the ecosystem and try to be a catalyst (or at least a gadfly) for change.

Many successful innovations can trace their origins to a stream of public funding. The major research universities that produce innovations are able to do so because they receive significant public funding. In the United States, the advances in medicine due to National Institutes of Health funding are too numerous to count. So too are the advances in science stemming from funding that comes to and through the National Science Foundation, NASA, NOAA, and myriad other agencies and research labs spread across the country. Science centers can celebrate the role of publicly sponsored research and make visitors aware of what is at stake should public support wane.

Innovation is worth celebrating in the same way that science itself is worth celebrating. We engage in science and innovation because we are convinced that the universe is both knowable and abundant with answers to the problems we face. Innovators instinctively have this view of reality. It enables them to follow their passions, defy conventional wisdom, take risks, persist through failure, build teams, and start enterprises.

Our science centers should find ways to celebrate innovators. Their successes can give us courage to take risks and persist through failures. Our science centers should also find ways to inspire the innovator in each visitor. If we do, perhaps our visitors will find renewed optimism for our world and for themselves. We will have done well if the product we ultimately produce is hope.

Tim Ritchie is president of the Tech Museum of Innovation in San Jose, California.

About the image: At the Tech Challenge 2011, young engineers attempt to design and build a device that can collect trash from the ocean without harming marine life. Photo by Don Feria