This is a supplement to an article on place-based learning that appeared in the May/June 2016 issue of Dimensions magazine. 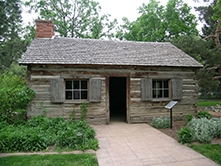 In a green park just beyond historic Old Town Fort Collins and bordered by the local public library, Fort Collins Museum of Discovery’s Heritage Courtyard welcomes visitors back to the early years of this Northern Colorado city. Founded as a military outpost in 1864, Fort Collins evolved into a desirable place for pioneers to settle with access to agriculture (fertile soil for sugar beets), goods (along a major train route), and education (home to Colorado’s land-grant university). Here in the Heritage Courtyard, youth in the museum’s week-long Boxelder Summer Program touch, explore, interpret, and learn within the Boxelder Schoolhouse (built 1905) and three pioneer cabins (built 1859, 1864, and 1882).

Through these camps, held for more than 25 years, youth explore Northern Colorado’s significance in the United States’ ongoing history. Past participants fondly describe their Heritage Courtyard summers and the local pride they continue to inspire. From reciting passages and playing period-appropriate games in the one-room schoolhouse, to studying the lives of early settlers in the cabins, to exploring the Native cultures of our region (including shelter, food, language, and dance), youth become stewards of our past, present, and future. Our 1859 cabin, for example, helps bring to life stories of the intersections between Native and non-Native inhabitants of Northern Colorado. It was home to Antoine Janis, one of the earliest non-Native residents of the area, who married First Elk Woman, a Lakota. When the Lakota peoples were ordered to leave the region for Pine Ridge Reservation in South Dakota, Janis abandoned his cabin and beloved Colorado to follow his wife and children. The discussion of the removal of Native Americans, and of Janis’s decision, is always powerful in helping students understand told and silenced stories in history, as well as presence and removal of cultures—issues that we continue to face today.

Youth and teachers co-create transformative experiences in these camps. In a session last year, students were fascinated by the Boxelder Schoolhouse’s old pump organ. A teen volunteer sat down and started playing a traditional American song and students began singing along. The next day, two sixth grade girls brought their flutes and accompanied the organ. The students kept practicing and decided, for the end-of-week recital, to bring their parents into the schoolhouse (something not done before) and perform the song with all the instrumentation. They had been a rowdy group throughout the week, but they pulled together, and in period-appropriate costumes, singing a period song in the one-room schoolhouse, the entire group traveled back in time.

Place-based education, with its focus on cultivating a sense of individual identity in relation to the natural environment, has traceable roots in the philosophies espoused by U.S. author and naturalist Henry David Thoreau (1817–62) throughout his adult life. In particular, Thoreau’s notion of sauntering, or exploration outward in ever-widening arcs, provides a new model for place-based museum experiences. This new model is not constricted to the museum building itself, or even to a single museum, and shows how museums can begin to reimagine themselves not as destinations but as companions to lifelong learning.

Cape Cod, the setting for Thoreau’s final published work, is the backdrop for a proposed place-based museum, called Thoreau’s Cape. Cape Cod boasts a dynamic landscape and a long, remarkably well-preserved history. Today there are at least 60 independent museums, historical societies, and nature preserves as well as countless historical markers dotting the peninsula. Thoreau’s narrative—a travelogue of his three-day saunter northward along the Lower Cape, from the plains of Nauset to Provincetown Harbor—would be the yarn that threads together the full range of these Cape Cod resources.

A return to first-hand engagement is essential to reverse the growing sense of detachment from the natural world that results from overreliance upon technological advancements, a phenomenon that U.S. author and journalist Richard Louv calls “nature deficit.” Thoreau’s Cape would take advantage of the ubiquity of mobile technologies as an entry point or introduction to the local environment. From there, individuals would be encouraged to embark upon a variety of open-ended learning trails that inspire real-world exploration, such as scavenger hunts. Along the way, the user experience would be buoyed by relevant photographs or collection highlights from local museums.

Thoreau’s Cape would not replace existing museums. Instead, it would be a new way for museums to share their expertise with nontraditional audiences without asserting intellectual authority over desired learning outcomes. Sample trails are currently in development and partnerships among interested museums are being cultivated on Cape Cod, but the hope is that Thoreau’s Cape will provide a workable model for place-based museums that can be translated to other locations and eventually become the standard for collaboration between museums and schools, community organizations, and local businesses.

The Museum Education Employment Program at the American Museum of Natural History in New York City is an immersive internship where diverse college-aged youth provide learner-centered tours within the museum to summer campers from around the city. The youth are given intensive training on planning and facilitating interactive tours, as well as on the physical structure of the museum, including key exhibits and halls. They are then tasked to design a tour connecting their interests to at least two of the exhibition areas.

The construct of place-identity—which points to the bonds that people form with places and the extent to which places become a part of one’s identity—informs our understanding of the impact of such programs. Through immersive learning and successful interactions with visitors, youth develop a place-identity with the museum. Badges and uniforms signify an official affiliation with the museum and are critical in affording the young people a sense of place-identity in connection with the museum. In our research, we have found numerous instances where alumni of the program describe how they “carry the museum with them” through their actions, discussions, and even ways of thinking about science. Many of the alumni have even secured full-time positions in museums around the country.

Museums are places that have played a key role in shaping our histories and identities. Programs that provide special access, intimate knowledge, and opportunities to contribute to the museum community allow youth to develop positive place-identities with museums. This not only changes the culture of museums in ways that celebrate youth perspectives but also creates a diverse workforce and visitor base that will sustain museums into the future.