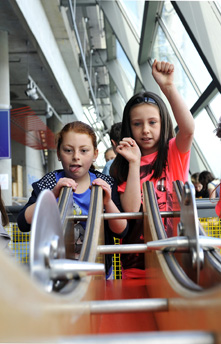 By Emma Wadland
From Dimensions
September/October 2011

“PLACES is ensuring that science centers and museums are quickly becoming the ideal forums for politicians to easily access reliable scientific information and for citizens to engage in two-way dialogue about science. This will allow people to exercise full citizenship in science and technology issues.”
—Antonio Gomes da Costa, coordinator of the PLACES project

Launched in June 2010, the four-year Platform of Local Authorities and Communicators Engaged in Science (PLACES) project is guiding science centers and museums to play the role of facilitator in providing information and helping local leaders and communities address local challenges. These challenges may include environmental sustainability, health care, transportation, education, or any number of other areas where science and society are inextricably linked.

PLACES is coordinated by Ecsite—The European Network of Science Centres and Museums and has three project partners.

• The European Regions Research and Innovation Network (ERRIN) is running Science Cities Workshops throughout the course of the project. These workshops help focus the concept of European science culture, whereby science becomes integrated into a city’s culture of addressing local challenges.
• European Science Events Association (EUSCEA) oversees pilot activities that are connected to City Partnerships’ Local Action Plans (described below).
• The Observatory of Science Communication, Universitat Pompeu Fabra, is conducting research and an impact assessment for the project.

The City Partnerships are mandated to develop a Local Action Plan (LAP) for science communication policy addressing science- and technology-related issues relevant to their city or region. LAPs must be developed in consultation with citizens. The intent is for a LAP to be a strategic vision that informs science communication policy at the local level for the next five to 10 years.

Any science communication institution can become a PLACES participant, and as of July 2011, institutions from over 70 European cities are involved in the project. Cities from outside Europe are also participating. Although each City Partnership focuses on its local city or region, the participating institutions can share ideas and information with each other via the Open PLACES website.

Museo Tridentino di Scienzi Naturali (MTSN), founded in 1964, has made a name in the northern Italian town of Trento as an authority on environmental preservation. MTSN’s director, Michele Lanzinger, plans to go a step further under the PLACES project to help the town embrace the notion of sustainability and its relationship to science. Lanzinger wants to draw the community’s attention to the environmental challenges of urban growth. He believes that MTSN can do so in a positive way that helps to provide substantial guidelines for the community.

MTSN intends to draw on PLACES to strengthen the relationships it has built in bringing science to the community and in providing policy advice to Trento’s city council. Within the community, for example, the museum hosts an annual biodiversity week, organizes events for scientists and the public to meet, and brings science to children in the city’s main square on weekends. With the city council, the museum has advised on sustainable planning of the city’s public spaces.

The city clearly values the museum’s contributions and its involvement in an international project, since it has agreed to fund a new building for the museum. The new MUseum of SciencEs (MUSE), scheduled to open in June 2013, will be the epicenter of Trento’s nature conservancy policymaking, dialogue, research, and learning, and will also form the nucleus of Trento’s PLACES City Partnership work.

Lanzinger believes that being involved in PLACES has increased the museum’s profile and bolstered its credibility when it presents proposals as part of a wider European project to the city council. He also embraces the novel and unconventional approach of PLACES. He explains that although most initiatives work toward developing activities, “PLACES is different and much more open-minded. It relies on exchange. It gives people the opportunity to meet and discuss and reach a diversity of approaches. Tell me your idea, and I will tell you mine.”

Glasgow is about to complete a commission on the city’s economic future, and “the PLACES project allows us to ensure that science, technology, and engineering will have a place here,” says Robin Hoyle, director of Glasgow Science Centre (GSC).

The city and GSC began conceptualizing their PLACES plans through involvement in the U.K.-based Science Cities project, which involves colleges, universities, health boards, museums, art schools, and industrial partners. The thrust of this project is to make science, technology, and innovation an engine of economic growth in U.K. cities.

“Improving lives” is the broad banner of GSC’s City Partnership work in PLACES. Using a broad theme has a distinct advantage when working with local authorities, because they deal with such a wide range of issues. Hoyle explains that the banner of “improving lives,” which focuses on themes like local renewable energy and health, allows the City Partnership to integrate many issues in which science plays an important role.

Though PLACES is still in its early stages, Hoyle is optimistic that the LAP developed by the Glasgow City Partnership will energize the city and provide a vehicle for advancing a science-in-society agenda in Glasgow’s economic future.

Bloomfield Science Museum Jerusalem has a longstanding relationship with its municipality, although creating those ties is tricky, according to Maya Halevy, the museum’s director. “We have had dramatic change with mayors in the last years, from having a very labor-oriented mayor, to a right-wing mayor, to a Jewish Orthodox mayor, and then back to a right-wing mayor,” she says.

Bloomfield has navigated the shifting political ideologies by remaining committed to a belief that science “disregards physical borders and cultural and religious differences,” as its website states, and is using its PLACES involvement to help it focus its partnership with the municipality. Halevy hopes to bring the deputy mayor of Jerusalem, who is a dedicated proponent of environmental initiatives, on board with the City Partnership.

Bloomfield’s City Partnership involves three main municipal organizations: the municipal government itself; the Jerusalem Foundation, a philanthropic organization and co-founder of Bloomfield; and the Jerusalem Development Authority, which focuses on building the city’s economic infrastructure. Halevy says Bloomfield decided a few years ago to support these organizations in delivering their missions—a strategy that is helping Bloomfield become a dynamic player in the city.

For example, the Development Authority is promoting Jerusalem as a “bio-city” to aid growth of the city’s biomedical industry. When approaching a science-based initiative such as this, the city “looks to business, academia, and government, but not to the general public. [The city’s] perspective is limited,” Halevy says. Bloomfield’s focus on public engagement with science and science education will help bring the important perspectives of Jerusalem’s residents to the initiative.

As part of its PLACES initiative, Bloomfield also wants to engage the city in a widespread effort to take care of the environment, which will involve working with cultural institutions such as Jerusalem Cinematheque and pinpointing how they can make a contribution. “We need to synchronize for impact,” says Halevy. With this in mind, Bloomfield is working with the head of the city’s cultural department to map how science and cultural institutions can work together in Jerusalem’s City Partnership.

The challenge for Bloomfield is to link these and other City Partnership initiatives in a strategic, sustainable way. Tying them all together will be a major component of the Jerusalem City Partnership LAP.

These three examples from Italy, Scotland, and Israel illustrate the diversity of approaches and initiatives that science centers and local governments are tackling through PLACES City Partnerships. At the project’s conclusion in 2014, local and European Union–level recommendations will be assembled into a blueprint for building European Cities of Scientific Culture. What is a European City of Scientific Culture? PLACES cities like Trento, Glasgow, and Jerusalem are on a concerted mission to find out.

Emma Wadland is communications officer and webmaster at Ecsite—The European Network of Science Centres and Museums, Brussels, Belgium. To learn more or to get involved in PLACES, email info AT openplaces.eu.

About the image: Visitors learn about angular momentum at Glasgow Science Centre. Photo by Andy Buchanan