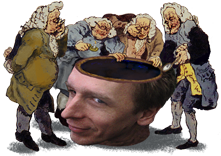 This interview appeared in the January/February 2015 issue of Dimensions magazine.

In January 2011, science communicator James Piercy was involved in a devastating car crash that took his wife’s life and left him with a serious brain injury. In the four years since that tragic day, Piercy has begun delivering science talks again—this time, from the vantage point of his own experience. Through Science Made Simple, based in Cardiff, Wales, Piercy travels throughout the United Kingdom and overseas to present “What’s Going on in His Head?”—a talk in which he draws on his own injury to educate audiences about the brain.

About the image: James Piercy has developed a presentation based on his experiences as a survivor of a serious brain injury. Image courtesy J. Kavanagh