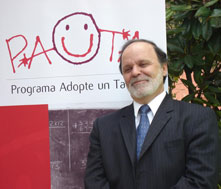 This interview appeared in the July/August 2013 issue of Dimensions magazine.

Alejandro Frank had been a nuclear physicist for around 25 years when, as he explains it, he “turned toward the children.” Eight years ago, Frank, professor of physics at the Nuclear Science Institute of the National Autonomous University of Mexico (UNAM), joined colleagues to determine science’s most important contribution to the country. Their conclusion: Science must be brought to the children. Frank and fellow scientists are now working to achieve this goal through PAUTA, which stands for “Programa Adopte un Talento”—the Adopt a Talent Program. Frank discussed the challenges and triumphs of this innovative project, which he’ll present as part of a daylong workshop before the ASTC Annual Conference in Albuquerque this October.