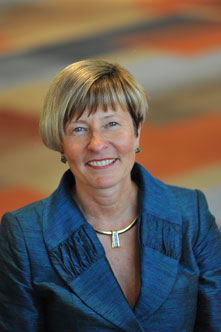 This interview appeared in the January/February 2013 issue of Dimensions magazine.

Watt’s Up? is both an exhibition and a question that Denise Amyot, president and CEO of the Canadian Science and Technology Museums Corporation in Ottawa, Ontario, is trying to answer through a cross-Canada initiative. Amyot spearheaded Let’s Talk Energy: Engaging Ideas for Canada’s Future, a six-year public engagement program launched in 2010. Her work earned her ASTC’s Roy L. Shafer Leading Edge Award for New Leadership in the Field, which she accepted at the 2012 ASTC Annual Conference last October. Amyot spoke with Dimensions about how she’s energizing Canada about energy.