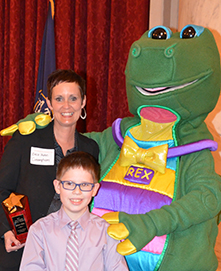 This interview appeared in the January/February 2016 issue of Dimensions magazine.

It’s any parent’s worst nightmare. When her son, Spencer, was 9 months old, Erica Hahn learned he had had a stroke in utero. Doctors believed he would never walk or talk. Exhausted, devastated, and needing to get out of the house, the single mom began bringing her baby to the Children’s Museum of Indianapolis, an outing the pair has taken two or three times a week ever since. Spencer not only took his first steps and said his first word at “his” museum, as he calls it, but has now marched in more than 200 of the museum’s End of the Day parades. Hahn spoke with Dimensions about her now 10-year-old son’s remarkable progress and why the museum means so much to both of them. You can learn more about their story at astc.org/myscimuseum and www.facebook.com/200parades.