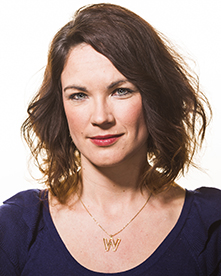 This interview appeared in the November/December 2015 issue of Dimensions magazine.

At any given moment, Lucianne Walkowicz might be rehearsing with her indie-punk band, training for a marathon, delivering a TED Talk, or helping a stranger determine whether there are, in fact, pyramids on Mars. An astronomer at Chicago’s Adler Planetarium as well as a TED Senior Fellow, Walkowicz is dedicated not only to studying science but also to sharing it with the community. And that community goes far beyond Chicago: as part of the Galaxy Ride, Walkowicz biked 300 miles (483 kilometers) from the Adler to the Saint Louis Science Center, Missouri, to bring the universe to the people within it. Shortly before she set off along the Route 66 trail, she chatted with Dimensions about her mission.