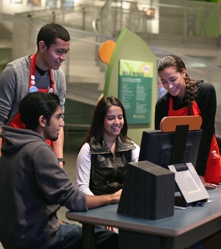 Educators at science centers, zoos, and other informal science education institutions (ISE) work in distinct traditions. Yet, funders often lump them into a single class of ISE environments. Even science centers and zoos themselves may imagine that they compete for funds and visitors. This tendency to think as competitors creates cultural silos in the field. However, what happens when two institutions in the same community focus their resources simultaneously on a shared topic?

Our team at New Knowledge Organization (NewKnowledge) and the New York Hall of Science (NYSCI), both in New York City, sought to answer this question. We see that science centers and zoos have professionalized separately and have complementary strengths. With several partners, we have been researching the plurality of voices in the ISE field and what can be gained by honoring them.

ISE institutions tend to address science literacy and environmental issues in isolation rather than integrate learning moments for fieldwide impact. We often hear how various institutions accomplish change through their missions, but we seldom reflect on how each type of institution contributes to larger, aggregate public value. We rarely consider if and how a community develops shared knowledge by sampling from the range of institutions that independently focus on similar science topics from different perspectives.

Results from our study of complementary exhibitions mounted simultaneously in a science center and a zoo in the same community suggest value in approaching ISE and community engagement as a collective force to enhance public value. When two institutions reach beyond brand competition to leverage their individual strengths, they can achieve allied goals. They have the potential to expand science literacy in their community, cross-promote to one another’s audiences, and develop their staff by learning from the approaches taken at other institutions.

The exhibition was designed to be mounted in two institutions in the same community at the same time. The exhibition started at NYSCI and Staten Island Zoo, New York City, in 2010, and then traveled to OMSI and Oregon Zoo for February–August 2012, and California Science Center in Los Angeles and Santa Barbara Zoo in 2012–2013. Wild Minds is at Science Central and Fort Wayne Children’s Zoo, Indiana, for April–September 2013, and will visit COSI and Columbus Zoo and Aquarium, Ohio, in 2013–2014.

The exhibition invites visitors to engage with current research on animal cognition that shows humans are not the only inventors, planners, and empathizers. While the goals for the exhibition remain the same for each host institution, the strategies for communicating content differ to suit the resources unique to each type of institution. For example, at the science center, an exhibit enables visitors to watch a video of a chimpanzee solving a puzzle and then try to solve the same puzzle themselves (often more slowly). Meanwhile, at the zoo, an interpretive sign offers similar information, and volunteers explain to visitors the cognitive enrichment puzzles offered to resident primates and how these puzzles reveal information about animal thinking.

The goal of our study was to explore how to deepen public value in science learning by simultaneously leveraging the unique types of learning at a zoo and a science center. To understand the strengths and challenges of distinct pedagogies in these two types of institutions, we looked at training and communication techniques of interpretive and education professionals. In Oregon, we expanded the study to include data from an experimental component of “cross-training,” where volunteers from Oregon Zoo and OMSI received training together and then served as interpreters at both their own institution and their partner institution.

We found that teams at the science center and zoo differed substantially in their pedagogical styles. Zoo personnel focused on affective experiences that encouraged visitors to develop connections with animals and their natural habitats. Their goal was to promote science inference that would support conservation behaviors. Science center personnel, in contrast, tended to focus on increasing science literacy and process knowledge to support a more general ability to use data for decision-making.

At zoos, observation of animal behavior and storytelling are considered two of the central tactics for promoting an understanding among visitors of animal-human connections. These experiences are used as tools to achieve conservation outcomes. Zoo personnel viewed science literacy as a serendipitous outcome of these conservation-learning experiences. The zoos prioritized learning by providing strong messages about animal and habitat conservation and welfare through environmental science knowledge.

On the other hand, science center personnel prioritized learning through process and method. In these institutions, science literacy and learning were leveraged by much higher staff-to-visitor ratios. Staff used information in the exhibits to build on personal encounters with visitors and to support visitors’ critical thinking and inquiry skills. They sought to mentor visitors in reasoning about science as a pathway to knowledge.

In our study, no one suggested that zoos and science centers elicit different learning outcomes. The science center and zoo personnel we interviewed agreed that both offer pathways to science knowledge development. But stereotypes emerged for describing the visitor experience. They uniformly described zoo visitors as visiting for fun with learning on the side and science center visitors as purposefully seeking learning that happens to be fun.

The collaborative aspect of this project was more than an end in itself. Rather, collaboration was intended to develop a richer exhibition experience with programs that build on one another to create deeper public value. We proposed that partnering on a project would enable institutions to leverage their relative strengths and rely more on partners in complementary domains to expand the usefulness of the science for visitors. In pursuing this idea, we learned that zoos felt science centers are more nimble at adapting their exhibits and addressing timely topics, whereas animal exhibitions take years to develop. In contrast, science center personnel felt they could learn from zoos’ deliberate focus on conservation decision-making.

How do we go about collaborating? Deep programmatic and exhibition collaborations are new territory for many ISE institutions. From our work with Wild Minds, we are developing a free online curriculum—to launch in July 2013 on www.newknowledge.org–to help communities of institutions build a collaborative muscle with the potential to magnify public value and socially productive outcomes.

Here are a few suggestions to help institutions start imagining how to work together to achieve greater public good:

We’ve learned from the teams involved in this project that when two institutions cooperate willingly, they can identify new possibilities for developing professional strengths that generate public value. For the past few decades, ISE institutions have started to adhere to a corporate model of competition for resources. Yet many of these institutions either started as part of the nonprofit, non-governmental sector or separated from government ownership to join this sector, and therefore they aim to achieve public good. This public good targets the same local community audience for all brands of science learning. Thus collaboration holds the promise of strengthening our impact if we redefine our narratives away from competition and think as parts of a broader learning community.