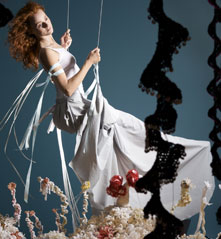 The explosive cocktail of art and science has been with us for millennia. We have long had individual practitioners—from Pythagoras to Steve Jobs—who defied disciplinary boundaries, but I personally think there is something very exciting going on now that makes art-science in the 21st century different. What seems to be emerging is a new generation of physical environments dedicated to nurturing “intersectionism.”

Since 2007, a number of these environments have opened around the world—including Le Laboratoire, Paris; the Art|Sci Center, Los Angeles; and Arts Santa Mònica, Barcelona. While these spaces each have their own distinct emphases, they are all examples of an emerging kind of cultural space, where science interacts with the arts and design in a conversational environment. There are, of course, earlier examples of spaces that have celebrated the intersection between art and science, including the Exploratorium, San Francisco, but the proliferation of hybrid spaces and approaches to bridging art and science in the past five years is remarkable.

So why is this emergence happening right now? I think the key reason is the crisis in specialization in our educational and cultural institutions catalyzed by the technological revolution since the 1990s. Whereas previous science centers were founded on the concept that we require more scientists, the new art-science centers and projects tend to spring from the idea of nurturing a new kind of person—an artscientist—able to move across disciplinary boundaries with agility. The mission of these spaces seems to be about stimulating creative collisions rather than “instructing” the public about particular areas of science.

Let me try to make this a bit more concrete by sharing some stories about the space we have established at Trinity College Dublin, Ireland. Science Gallery, which opened in February 2008, began with a group of Trinity College Dublin scientists who wanted to create a center for excellence in nanotechnology. They thought that the building should also include a new way of engaging the public with emerging science and technology.

We looked hard at how we might do this. The space was quite small, so the possibility of creating an Exploratorium-style science center was out of the question. On the upside, we had a fantastic city center location, with a giant shop window onto one of Dublin’s busiest streets. We decided we had a unique opportunity to make the membrane between a major research university and the city more porous.

Science Gallery would not be a place to receive instruction about science dressed up as “fun,” but a “particle accelerator for people” from different backgrounds and perspectives to bounce off each other in creative collisions. Emboldened by the experiments beginning elsewhere in the world, we saw the dialogue between art and science as shorthand for a broader cultural exchange between the world of research and the city.

Some university scientists were highly skeptical about the concept of “a place where ideas meet.” We were very fortunate to have the support of an enlightened university president who insisted that bringing science and the arts into dialogue was critical, and allowed us to experiment with new models for public engagement.

We developed a very open, collaborative approach to interdisciplinary conversation. We select an extremely broad theme (like “light” or “fear”) and issue an open call for project ideas from scientists, designers, artists, and engineers in the community. An interdisciplinary group of curators reviews the proposals and invites a selection of applicants to develop their projects for implementation in the gallery. The advantage of the open call process is that it attracts a very wide (and unpredictable) range of project ideas, and proposers of projects are usually very enthusiastic, frequently giving their time to events in addition to their specific installation or exhibit.

Our INFECTIOUS project is a good example of what Science Gallery is all about. We were approached by two leading Trinity College immunologists with the idea of doing a show on the theme of Plague. We said, “Hmm, interesting idea, but sounds a bit…negative.” After brainstorming for a while, we thought: What about calling it INFECTIOUS, and considering everything from viral marketing to contagious laughter, as well as pandemics? We ended up opening the show—which contained a simulation using RFID tags, where visitors could “infect” each other electronically—in April 2009, just days before news of the H1N1 flu broke! Some people even blamed us in the media for starting the pandemic as a public relations stunt.

We had artists, immunologists, epidemiologists, designers, musicians, economists, and even comedians all engaging with contagion, the spread of ideas, jokes, financial panics, and fashion trends. The lead scientist in the project eventually published a three-page interview with an artist in Nature Immunology, a completely unprecedented move on the part of the journal.

So what have we learned? Well, over the past few years we have identified some practices that seem to work:

We have also identified some key challenges:

Science Gallery’s next goal is to stimulate and support the development of a global network of galleries drawing from the lessons of the Dublin model, in partnership with leading universities in urban centers. The network will enable the sharing of ideas, experiments, and touring exhibitions, drawing on the unique artistic and scientific communities present in each city. In December 2011, Science Gallery was awarded €1 million (USD 1.3 million) by Google to support the development of the Global Science Gallery Network, which will be launched in July when Dublin is a City of Science and host of the Euroscience Open Forum (ESOF) conference. Ultimately, a key challenge for the new generation of hybrid spaces, including Science Gallery, is how they can move from being boutique experimental spaces to  “infecting” mainstream formal education with new approaches. Science Gallery is currently developing a Learning Lab to support formal education in Ireland in integrating art and science.

About the image: Model Sophie Merry is pictured at HYPERBOLIC CROCHET CORAL REEF, an exhibition created and curated by Margaret and Christine Wertheim of the Institute For Figuring in Los Angeles. Photo by Patrick Bolger