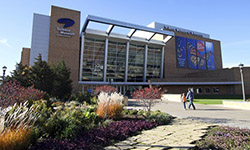 By Pat Hamilton
From Dimensions
November/December 2018

Something momentous happened on December 12, 2015. After years of negotiations, 197 nations came together in Paris and agreed by voice acclamation to the world’s first binding commitments to fighting climate change.

Then something alarming happened on June 1, 2017. President Trump announced that he was withdrawing the United States from the Paris Climate Agreement.

And then something astonishing happened on June 5, 2017. Leaders from across the United States announced the We Are Still In network to defend America’s commitment to tackling climate change, ensuring a clean energy future, and upholding the Paris Agreement. To date, nearly 3,600 entities spanning all 50 states representing more than 169 million Americans and $9.5 trillion of the U.S. economy have joined We Are Still In. And the network continues to grow.

The Science Museum of Minnesota is an inaugural member of We Are Still In’s new cultural institution category. The museum joined not only because we believe it is the right thing to do, but because addressing climate change will yield enormous economic, employment, educational, and environmental benefits for us all. For instance, the museum’s energy efficiency and renewable energy improvements have pumped money into our local economy, helped employ numerous tradespeople, and now are saving the museum more than $300,000 each year. Our actions are also slashing the museum’s carbon pollution by nearly four million pounds annually and advancing the museum’s goal of being a showcase of energy innovation.

Since the completion of a major energy efficiency retrofit in March 2015, the museum has hosted dozens of tours not of its exhibit halls but rather its main mechanical room. Numerous architects, engineers, business leaders, policymakers, and other professionals have taken the opportunity to view firsthand how the energy consumption of a large, existing building can be dramatically and profitably reduced.

Scientists are speaking out with great urgency about the need for us all to reduce dramatically carbon pollution. Science centers and museums are popular advocates for the power of science to inspire learning, improve lives, and inform policymakers. As a U.S. science museum, we’ve decided to take a leadership position in championing the clean energy economy that science dictates is essential for a secure climate future.

Patrick Hamilton is director, global change initiatives, in the science division of the Science Museum of Minnesota. To sign the We Are Still In declaration, go to www.wearestillin.com.