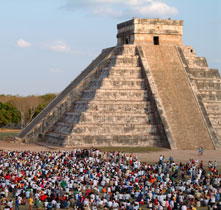 By Laura Huerta Migus
From Dimensions

Science centers and museums fill a unique community role as centers of learning, research, entertainment, and community congregation. Beyond teaching scientific concepts, the underlying motivation for all science center activities is promoting the value of science and scientific thinking to the general public. Science centers and museums face a number of challenges in fulfilling this mission, not the least of which is working to achieve this goal across cultures and worldviews.

This article will explore the particular challenges and opportunities for science centers in working on a relationship between the Western science paradigm and traditional knowledge systems (TKS). As defined by the International Council for Science, traditional knowledge systems are the “cumulative bod[ies] of knowledge, know-how, practices, and representations maintained and developed by peoples with extended histories of interaction with the natural environment.”

This particular dialogue about negotiating worldviews is relevant to all institutions, whether or not they work with traditional or Indigenous communities. Many of the strategies employed in this arena are applicable to working with any cultural group, and many of the key questions (e.g., equity and relevance) are the same.

The first challenge for science centers and museums is the sometimes contradictory cultural values of TKS and Western science. Science can be considered a culture unto itself, with its own set of practices, behaviors, and expectations, including critical questioning, objectivity and honesty, recognition of previous knowledge, and the pursuit of knowledge that will benefit society.

The cultural underpinnings of science narratives become especially visible when compared with TKS, particularly when it comes to the notion of objectivity. Traditional knowledge holders often do not separate knowledge of the physical world from spiritual practice and lived experience. In addition, the nature of TKS tends to be intensely local, built upon multigenerational observation of and adaptation to the local environment. This holistic and localized approach results in unique ways of seeing the world, including ways of organizing knowledge that often differ greatly from those generally accepted in Western science settings. For example, some groups might conceptually link plants and animals together based on the time of year that they are active, in contrast to the Western science model of categorizing by genus and species.

Rather than seeking to supplant these knowledge systems, science centers can be powerful partners in promoting respect for Indigenous and traditional knowledge. The United Nations Educational, Scientific, and Cultural Organization (UNESCO) has recognized the value of these systems as repositories of the diversity of human knowledge and key resources in understanding the environment and working toward sustainable economic development.

The challenge for science centers and museums then becomes how to promote science while still respecting traditional cultural values and individuals’ cultural identities. Some key principles to keep in mind include:

A fraught history and modern tensions

In addition to finding the balance point between respecting TKS and advancing a culture of science, centers and museums can also face the challenge of overcoming the perception of museums as colonial institutions. Traditional and Indigenous knowledge holders have historically been marginalized from participation in majority society, and their knowledge systems either have been ignored or treated as an object of anthropological study in museums. In particular, there is a long history of museums improperly obtaining and displaying sacred objects and human remains.

To overcome this legacy, modern science centers and museums must recognize the historical context in which they are situated with respect to Indigenous and traditional communities. We are now past the time of representing Indigenous people in dioramas of the natural world, but the legacy of this practice in museums is still present for many Indigenous and marginalized peoples. In particular, science centers and museums—whether or not they are collections-based—must be cognizant of this history as an “invisible” barrier that may need to be addressed in order to establish a relationship built on mutual trust.

Additionally, the role of TKS in science innovation is often invisible in mainstream science narratives. It is common knowledge that many new medicines have been derived from rainforest plants, but somehow the traditional knowledge holders who work with researchers are not recognized as active agents in discovery, but as background players. Indigenous peoples are now gaining more support from the UN and an increasing number of nongovernmental organizations and governments for acknowledgement of their intellectual property rights.

As Science Museum of Minnesota President Eric Jolly has said, museums are places of story. Science centers must reflect on whose stories of science they are telling. As public spaces that engage the public in critical thinking, science centers should incorporate questions of equity to empower not only Indigenous and traditional communities, but also mainstream audiences in creating a more civil global society.

Despite the real challenges of bridging divergent and sometimes contradictory worldviews, there are a number of institutions—some of whom tell their stories in this issue of Dimensions—who have dedicated themselves to working on these issues, each developing strategies tailored to their specific contexts.

In September, the field convened around this topic at the 6th Science Centre World Congress in Cape Town, South Africa, and resolved in the Cape Town Declaration to “continue to develop programs that promote awareness of the multicultural roots of science and the value of Indigenous knowledge systems.” We look forward to learning how science centers, dedicated to equitable access to science knowledge, are advocating for equity and justice in scientific practice and communication.

Von Thater-Braan, R. “Explorations into Native Science: A Journey into the Spirit and Nature of Science.” The Native American Academy.

About the image: On the spring equinox, the sun casts a shadow that resembles a serpent descending the stairway of El Castillo at the Maya archaeological site of Chichen Itza on Mexico’s Yucatan Peninsula. Photo courtesy NASA/Barbara Lambert