The Future of Exhibits: Where Are We Headed? 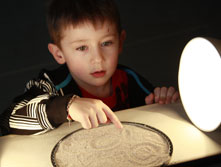 By Julie Bowen
From Dimensions
July/August 2012

I have been wondering for a while why recent ASTC annual conferences have had fewer sessions about exhibits than they did five or 10 years ago. Have exhibits reached a point of perfection and become a craft needing only minor tweaking around the edges? Have museums run out of new things to talk about in exhibits? Are exhibit developers too busy or too few, or is exhibit development being outsourced? Is our modality of interactive, hands-on physical exhibits at the end of the evolutionary road? Or, is there an inflection point where exhibits transform into something new? I was caught musing out loud about these questions and asked if I would speculate on the future direction of exhibits.

The innovation of exhibits

To me, the future means innovation. Innovation can be seen to happen in two ways: slowly, iteratively, incrementally improving the system (like improvements to a computer operating system) and jolting the system (think Apple’s “i” revolution).

I would argue that 40-plus years ago, interactive, hands-on exhibits were a jolt to the system—a sea change for museums and their visitors, a disruptive innovation. We’ve spent the subsequent years exploring, improving, and evaluating this medium.

I wonder if another jolt to the system is coming or if we can initiate one. After all, exhibits are expensive to build and change. Interactivity is widespread. It’s hard to incorporate the rate of technological change, and we get criticized for not keeping up. There is also the question about whether exhibits continue to appeal to our audiences or are able to connect with our demographically and culturally changing communities.

According to science fiction writer William Gibson, “The future is here. It’s just not widely distributed yet.” Perhaps some of the directions that science centers are exploring might off er clues to a future for exhibits. Or they might not. After all, as business consultant Peter Drucker wrote, “Trying to predict the future is like trying to drive down a country road at night with no lights while looking out the back window.”

Trend in the field

With these caveats, what interesting experiments are taking place in science centers? I’ve come across a few:

TrendsWatch2012, recently released by the American Association of Museums’ Center for the Future of Museums, highlights seven trends, some of which are being talked about in exhibit development circles and even making their way into new exhibits:

Innovation often results from looking across fields or disciplines and combining ideas from different places in new ways—called associating. Steve Jobs was a master at associating, as are many successful innovators. In The Innovator’s DNA, Clayton Christensen and his colleagues argue that associating is one of the defining skills of innovators. What about museums looking farther afield for innovative ideas? Could ideas in other fields apply to exhibits? For example:

Where do these trends and innovative ideas lead us? I suggest that we follow the advice of Alan Kay, a computer scientist, who said, “The best way to predict the future is to invent it.”

Each of our institutions is unique. We have our own mission, internal and external cultures, funding models, community relationships, and audience mix. A trend or direction that works for one might not work for another. So instead of checking off a laundry list—“We’ll take one mini-exhibition, one immersive environment, one pop-up exhibit experience, and future, here we come”—I suggest that each of our institutions map its own exhibits future. I offer the following ideas to get started.

Begin by priming the pump. Immerse yourself in new experiences. A field trip to another place is a great way to get ideas flowing—just be sure to visit more than the local science center. Take in the architecture, the retail innovations, an unusual performance or art exhibition, or a restaurant that’s doing something new. Check out toy stores, surf the net, pick up magazines on topics you know nothing about, and talk to people in fields outside your own. These experiences will give you fodder for developing associating ideas when you least expect to.

When you have some ideas, experiment. Lots. With very little investment, build, try, test (with an audience), abandon, modify, and try again with a new idea, location, or audience. In Great by Choice, Jim Collins emphasizes that the most successful companies release a lot of bullets before firing the cannonball. Conduct lots of experiments before investing in one thing. I’m not suggesting prototyping of refined concepts, but instead pilot testing of early ideas. Pilot testing affords you the opportunity to test ideas that are a little “out there” to see what might stick with an audience, and it allows you to test with little investment of money, time, and passion. (Too much passion might cloud judgment.) With a lot of experiments done quickly and cheaply, a unique direction might emerge.

What might this approach look like? Imagine that you want to start a dialogue about nutrition in your community. You could pilot test a pop-up concept in the local library. Or you could develop a series of cardboard-and-duct-tape exhibit ideas or tabletop activities to try in the local coffee shop or hospital. Or you could partner with a food truck to integrate exhibits into their menu. While testing ideas, look for ones that hold people for a long time, that lead to discussion, or that elicit lots of good questions, as these ideas are likely the ones worth pursuing.

You can go further and bring your audience in as idea generators. Team people up and have them build things with you—quickly. This kind of pilot testing might go anywhere. Don’t be afraid to iterate the approach, the idea, or the process. Just be sure to let everyone involved know that what you’re doing and what they’re creating are experiments. Our science center is founded on the concept of pilot testing. In the two years before opening our new building in October 2011, we tested over 1,000 ideas with audiences, leading to more than 150 exhibits in five halls.

Who knows what the future holds for exhibits? You might have already glimpsed it or you might be building it right now. If you look in lots of different places, you might be the first to see it.

About the image: A boy experiments with a pilot test version of the Sand Animation exhibit at TELUS Spark. Photo courtesy TELUS World of Science, Calgary, 2009.