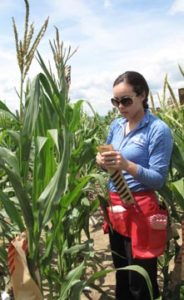 By Carlyn S. Buckler
From Dimensions

On the first day of the Science and Society course at the Cooperstown Graduate Program in Cooperstown, New York, I present the students with an incandescent lightbulb, with clear glass so one can easily see the filament inside. I ask the students how it works and they are able to tell me that the electricity comes in there, runs through the filament here, heats up, and produces light. Then I take out my iPhone and slide it across the table and ask, “How does this work?” Blank stares abound.

When Thomas Edison patented the incandescent lightbulb in 1880, most people could understand—at least at a basic level—how the things around them worked. But around the time the atomic bomb was developed in 1945, things changed. Today, with the advent of nanotechnology, de-extinction, quarks, prions, genetic engineering, and other discoveries, the public understanding of science has become difficult to navigate, to say the least. Many of these technologies are hard for us to fathom, let alone understand.

Today, many of the world’s most pressing issues are science based, including climate change, disease, energy transitions, food security, water allocation, pollution, and mass extinction. These are global problems that must be addressed on a global level. If we are to rationally create policy that effectively addresses critical issues and regulates new technologies, we need a global, scientifically literate voting public.

If you’re reading this article, then you likely understand the important role informal science education (ISE) plays in the public understanding of science and that there are many factors to be considered when implementing outreach. In all our science museum studies courses at Cooperstown, we emphasize cultural and community awareness, sensitivity for the diversity of approaches to learning, mediation, inclusion, and understanding the veracity of our sources and the information we impart. These are important lessons for all science center and museum professionals to remember as we work toward being recognized by our communities as the “go-to” sources of information on today’s critical global issues.

Some new Cooperstown students believe in a “one-size-fits-all” approach to science museum programming, which includes a belief that, “If I teach them, they will believe” (the information deficit model). Yet access to information alone is not enough. Ideology plays a huge role in what information audiences are receptive to, what issues they take action on, and what behaviors they may be willing to change. For example, climate change deniers are less likely to be convinced by pictures of polar bears on thin ice, but they do tend to respond to information about climate change that directly affects their lives (Bain et al., 2012).

As new students at Cooperstown collaborate with local venues around central New York, they tend to see one demographic: white, middle/lower middle class, politically conservative, rural families. Yet communities are often more ideologically diverse than they first appear. It is true that people who live in rural areas across the United States are in general politically conservative (and conservatives tend to be less likely to believe that climate change is caused by humans (Pew Research Center, 2015)). However, in studies by Stedman et al. (2012, 2004) of rural central New York, 43% of respondents self-identified as liberal, those that were politically moderate tended toward liberal views on climate change, and landownership correlated with increased knowledge about climate change. In short, people and communities are complicated.

I find that it is a valuable exercise to initially let students make assumptions about communities and then let them realize their own biases. When developing outreach, ISE professionals need to address the individual needs of their communities and be sensitive to the variations in ideology and circumstances for each demographic. We need to know our audiences and deliver science in ways they can process and understand.

One of the most important skills to develop as ISE professionals—or as politicians, voters, and thinkers—is to understand the veracity of the sources of your information. This is something we emphasize every day in class, in every discussion we have. Many people get their information about science issues from nonscience sources, such as opinion news programs, talk shows, and social media. There are certainly some good resources out there, but the advent of the internet means there is also a great deal of “noise”—much opinion and little actual science fact.

Who is talking? Why are they talking? Who do they believe their audience is? What do they have to gain, if anything, from making these statements? These are some of the questions we pose in class after reading any article, watching any video, or listening to any podcast. They are also the first questions students answer when they write their summaries and opinions of the media on a given topic. Training ourselves to think about how we know what we know can eliminate a great deal of subtle bias and misinformation. We train students to start statements with, “According to a paper in Science last week . . .” or “On the National Oceanic and Atmospheric Administration site it says…” Consistent practice questioning our sources of knowledge is the only way to ingrain this process in our daily lives.

Advocacy and the ISE professional
My colleague Richard Kissel (from the Yale Peabody Museum of Natural History, New Haven, Connecticut) and I have discussed advocacy previously in Dimensions. Our bottom line was that the role of science museums is, in general, not as advocates. Science tells you how the world works; it does not tell you what to do. That’s the role of policy and government. I have no problem advocating where we have scientific consensus and where policy has been rationally decided, such as in the case of recommended immunizations. However, energy transitions, feeding a future population of 9 billion people, and preserving the water ecosystem that covers 70% of our Earth’s surface are some of the most abstract and complex issues we as a species have ever had to deal with.

In the case of energy, no technology or resource we have right now is sustainable. Nothing we have now is the end-all answer. There is no truly carbon neutral energy source in our foreseeable future, although we certainly are trying (think biomass, hydrogen, solar, algae, wind, biochar, duckweed, and switchgrass). The question, then, is what do we use in the meantime? What transitions will get us to where we need to be with food and water security, energy production, conservation of diversity, climate change mitigation and adaptation, and protection of the environment, while we research the ultimate solutions?

The public doesn’t like uncertainty, and in many cases, science can’t give definitive answers to our most pressing problems. What science can tell us is that given a set of parameters and based on current knowledge, what the probability is of a particular outcome. This is tough for Cooperstown students and other ISE professionals to grapple with. As an educator, one of the hardest things to say is, “I don’t know.” As circumstances allow, this statement needs to be followed with, “. . . but let’s find out!” After all, science is more about the questions than the answers. It’s what we don’t know that drives science, and teaching people this is invaluable.

ISE professionals need to, as best they can, understand where their communities stand on global issues, what information they do and don’t have, and what the cutting-edge science is. We need to give our communities credible scientific evidence and try to interpret the facts for them, showing the pros and cons of various actions, so they can make informed policy decisions.

One great example of education comes from Don Duggan-Haas, Rob Ross, and their colleagues at the Museum of the Earth and Cornell University in Ithaca, New York. They have published a book (2013) about the science of the problems and benefits of harvesting the natural gas in the Marcellus shale. They have also organized town hall–style meetings throughout central New York to talk about hydraulic fracturing (“fracking”) with local communities. Even with their great mediation skills, this can be an extremely difficult and taxing job. In a personal conversation, Duggan-Haas admitted that it was some of the hardest work he’s ever done, but also perhaps the most important.

Many minds working together
In my perfect world, when anyone wanted science information on, say, energy transitions, climate change, protecting water and food resources, or vaccination risk, they would come to their local science center or museum and find the information they need to make informed decisions. Science centers and museums need to have information available that reflects current research. Keep abreast of what your community needs and understand that “one size does not fit all.” Get out of the museum and into the community and have conversations through town halls, events in local parks, and collaborations with libraries, schools, and businesses. Do whatever you can to make your presence and your mission known and to spread the message that your institution is the place your community members need to go to get credible information on the issues.

There are nearly 50 countries represented within ASTC. ASTC supports Communities of Practice and other active forums that provide a huge opportunity for sharing ideas, developing strategies, and avoiding reinventing the wheel in our industry. And these communities and forums are a great resource for different cultural perspectives. Coming to the ASTC Annual Conference whenever possible is a fantastic way to be on top of what’s on the cutting edge of ISE while meeting like-minded professionals, making new connections, and sharing ideas. Sometimes just reading someone’s post on an ASTC forum about a similar problem you’re having can, at the least, remind us that we’re not alone in this endeavor.

Few of us are flush with cash, but people are coming through our doors and they are asking questions. We can push forward to create a culture where science centers and museums are the place to go when the public needs information about the world around us. We all stand on the shoulders of giants, those in our industry who came before us. The road ahead will be forged by not just one institution, but rather a global, functioning society of ISE providers—many minds with different expertise and perspectives—working together with our communities to increase the public understanding of science.